Including Matt Doherty’s move to Spurs, the super agent has wrapped up another extremely profitable summer 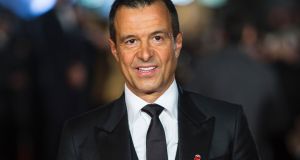 Jorge Mendes: “I try to dedicate my time to my family and spend my life working, on the phone until midnight.” Photograph: Jack Taylor/AFP via Getty Images

The football economy is reeling. Every week there appears to be a new, dizzying figure highlighting the financial crunch the industry is facing as a result of the coronavirus pandemic. More than €97 million in losses at Barcelona alone. Hundreds of millions more in rebates to television rights holders. Across Europe, losses are expected to climb as high as €4 billion.

But the crisis has also created a few winners. Among the biggest has been Jorge Mendes, the Portuguese businessman and player agent, who for the last two decades has regularly taken a healthy slice from the €6 billion-a-year player transfer market. This year, despite soccer’s meltdown, Mendes appears to be doing better than ever.

In the transfer window that closed Monday night in Europe, Mendes sent Benfica’s Rúben Dias to Manchester City for €68 million, then replaced him in Lisbon with another client. He eased James Rodríguez out of Real Madrid’s doghouse and into a starring role at Everton, and arranged for Wolverhampton to sell the Irish defender Matt Doherty to Tottenham (€15 million) and the Portuguese forward Diogo Jota to Liverpool (€50 million).

And even as he completed those last two sales, Mendes helpfully persuaded Wolves to spend some of the money it received in his own shop: Wolves replaced Doherty with another Mendes client, Nelson Semedo, and used most of the money from Jota’s sale to recruit two rising talents – two more deals driven by Mendes – from FC Porto.

Across the board, from the unheralded signing to the headlining-grabbing move, Mendes left his imprint across Europe again. This summer’s deals alone have produced hundreds of millions in sales, and – perhaps more important to Mendes and his agency, Gestifute – tens of millions in commissions.

“It seems he is not touched by the crisis,” said Pippo Russo, the author of a book that charted the rise of Mendes, 54, from Portuguese nightclub manager to one of soccer’s most dominant actors. “We can say the economic power network of Jorge Mendes resisted the coronavirus. It is as if he has the vaccine.”

Permanently tanned, impeccably dressed and usually outfitted with a pair of glistening white earphones to field calls, Mendes is never off duty, never pausing in his efforts to cultivate new inroads that could yield new and richer deals. The Mendes business model is built upon relationships, and this summer’s transfer window has seen him leverage them to full effect.

Operating deftly in an unstable marketplace, Mendes worked with both financially stricken clubs looking to balance their books and with the few cash-rich outfits that saw opportunity amid the financial uncertainty. The roots of his business are now so entrenched, in fact, that in some cases he and his company are represented on all sides – buying club, selling club and player – of a given deal.

In one recent example – the move of Doherty from Wolves to Tottenham – the guiding hand of Mendes touched every facet of the deal.

Wolves, you see, is owned by Fosun International, a Chinese conglomerate that also holds a minority stake in Gestifute. And Doherty, who turned to Mendes earlier this year to guide his career, left a club managed by Mendes’s first professional client, Nuno Espirito Santo, to join a team coached by one of Mendes’s most high-profile clients, José Mourinho.

Wolves’s relationship with Mendes has been the subject of scrutiny in English soccer, with rival clubs complaining about his close ties to Fosun, to Espirito Santo and to a handful of the players on the team’s roster. An investigation by the Football League, which is responsible for the three professional tiers of English soccer below the Premier League, found that there were no breaches in how Wolves – bolstered by a clutch of Mendes-linked players from Portugal – secured promotion to England’s top flight in 2018.

But Mendes’s dealings with the club, and others, run deep. Wolves – and Mendes – were also at the centre of two curious trades this summer involving FC Porto, a Portuguese champion with a two-decade link to the agent.

On the cusp of a financial meltdown, and with large debts coming due, Porto turned to Mendes to find buyers for some of its up-and-coming stars. In a feat of alchemy that Mendes appears to have honed to perfection, Mendes convinced Fosun, his Chinese partners at Wolves, to pay what could be as much as €60 million for two highly rated though largely untested youngsters: Vitor Ferreira, a 20-year-old midfielder known as Vitinha, and Fábio Silva, an 18-year-old forward.

A quarter of the €40 million fee for Silva ended up in agents’ commissions, Porto announced, with most of it going to Mendes.

The size of Mendes’s commission for Silva was eye-catching, and considerably above the industry average, but not uncommon: Last year, when Mendes arranged the $138 million sale of the Benfica teenager João Felix to Atlético Madrid, he reportedly earned about $35 million in the deal.

Still, it was another sign that whatever measures soccer’s governing body, Fifa, imposes to try to curb the excesses of the transfer market, the most canny operators are always able to generate sky-high returns.

Porto, which is regulated on the Portuguese stock market, declined to explain why it had agreed to part with 25 percent of the sale price for Silva in commissions.

A spokeswoman for Mendes declined to comment on any of Mendes’s past or present deals, saying the agent never discusses his business publicly.

Portuguese agents have privately fumed about Mendes’s influence over the industry for years. Yet Mendes is so well-connected that clubs routinely call on him to grease the wheels of deals even when he is not affiliated with the player in question. In January, for example, he was paid €6.8 million for helping arrange for Braga, a mid-ranking Portuguese team, to sell its young forward Francisco Trincão to Barcelona. Trincão’s registered agents were not involved in the sale.

In 2018, the president of Benfica, Portugal’s biggest team, described Mendes’s role as akin to a taxi service, ferrying out the club’s best assets in one direction and ferrying in millions in the other.

Last week, Mendes helped Benfica replenish its accounts once again. Benfica agreed to send striker Carlos Vinicius on loan to Tottenham under an agreement in which the London team will have to pay €40 million to make the deal permanent next summer, and then it sold Dias, a talented defender, to Manchester City for a fee of €68 million.

Dias’s arrival at Manchester City was bad news for Nicolas Otamendi, since he plays the same position. But Mendes had a solution there, too: Otamendi was promptly sold to Benfica for €15 million, slotting neatly into the space Dias had vacated. Mendes, as Otamendi’s agent, cashed in again.

His ties with clubs and executives have at times allowed Mendes’s operation to seem like a carousel on which a never ending cast of athletes floats from one club to another. In collecting commissions each time, Mendes directs a system that sometimes seems as sophisticated, and as meticulously choreographed, as anything a coach might direct on the field.

Mendes rarely gives interviews, but he was required in 2017 to explain how his business operated at a court hearing in Spain, where the authorities charged a number of his clients, including Cristiano Ronaldo and Mourinho, with tax evasion. Most of the cases were resolved with guilty pleas and fines.

Mendes told the Spanish court he knew nothing about his clients’ tax arrangements, saying he had hired professionals to deal with those affairs. His focus, he said, was purely on guiding their careers.

“I dedicate myself only to this, trying to find the best solutions for my players, and spending a year is like spending a minute,” he said, according to news reports at the time. “I try to dedicate my time to my family and spend my life working, on the phone until midnight.”

This year, even when soccer ground to a halt, Mendes kept right on working. He remains the agent always ready with a solution, providing clubs can afford his fee. – Guardian

Jones says Barbarians fiasco made rugby a ‘laughing stock’ 07:29
Arsenal put three past Dundalk in comfortable win; O’Gara expecting shootout in Paris 07:12
Ireland can treat fans to some tricks on Halloween night in Paris 07:54
Louth starting afresh 10 years on from Leinster heartbreak 07:31
Jackie Tyrrell: We’ve got the championship back. But where’s the physicality? 06:00

1 Ronan O’Gara: Ireland need to be braver than usual ‘in a shoot-out for gold’
2 Jackie Tyrrell: We’ve got the championship back. But where’s the physicality?
3 America at Large: Golfers guilty of legitimising Trump’s toxic regime
4 Ireland can treat fans to some tricks on Halloween night in Paris
5 Six Nations - France v Ireland: Kick-off time, TV details, permutations, team news and more
Real news has value SUBSCRIBE
Crossword Get access to over 6,000 interactive crosswords