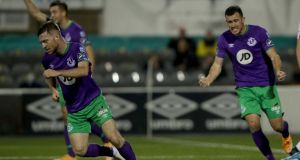 February’s game between these two may well yet be remembered as the highlight of this season with a packed house in Tallaght seeing Shamrock Rovers take an important early step towards wrestling Dundalk’s league crown away from them. It would be better for everyone if that was the way the rivalry between the two clubs over the course of the campaign was to be recalled for this was a million miles from the title decider that might have been imagined when the redrawn fixture list came out just a couple of months back.

Rovers could scarcely have dreamt back then that they might come to Oriel Park and win so easily. Nor is it likely to have occurred to them that with nearly a third of the truncated season still to play they would head for home with an 18th league title as good as in the bag.

Bohemians boss Keith Long had as good as conceded on Friday night, and Filippo Giovagnoli’s team selection here told you all you needed to know about his position four days before a Europa League match that is worth the best part of €3 million guaranteed to the club as well as (you would imagine) a longer term deal for himself.

Just one of the Italian’s starting line up from the game against Sheriff Tiraspol, Chris Shields, survived and only because he is suspended for the visit of KI. Andy Boyle returned having served a ban in midweek and 18 year-old Andrew Quinn came in to make his senior league debut. Quite a few others have been a little peripheral this season and several seemed to be still getting acquainted when it came time to start defending set pieces.

If things were tighter at the top, there would have been no shortage of people arguing that the league as a whole deserved better than this but nobody could actually expect it in these particular circumstances.

Rovers, who arrived unbeaten in domestic competition for just over a year, might well have fancied themselves regardless but as it was they were made to work hard enough through the opening stages and Dundalk, courtesy of Nathan Oduwa, who went close himself in the dying minutes, created two very good chances to score before the break. The first was struck tamely at Alan Mannus by David McMilan, the second blasted over by Jordan Flores.

Having initially struggled around the home side’s area, Jack Byrne conjured up a little magic in the 36th minute to get them going with the midfielder skipping past Flores on the turn 35 metres out and feeding Graham Byrne before pushing on to convert a Ronan Finn cross from close range. The finish itself was scrappy and Aaron McCarey might reckon he was unlucky not to keep it out but the fact was that Rovers were on their way.

A second followed within five minutes when Liam Scales turned a Byrne corner back towards the near post where McMillan seemed to get the last touch and Will Patching’s determination that Scales would get to make the same impact at another corner a few minutes later led to a penalty which Aaron McEneff rather coolly put away.

With the game clearly already over as a contest, the second half was open and entertaining but completely inconsequential. The hosts, to be fair, did a good bit more than just avoid the scoreline becoming a complete embarrassment which was an achievement given the makeshift nature of the team.

Rovers, though, had little reason to push themselves and Byrne, who had looked like he was really beginning to enjoy himself prior to the break was more subdued again after it, at least until his goal six minutes from time for which he got ahead of Shields rather easily then around McCarey who had come a little rashly. Even then, though, the midfielder did quite well to put the ball away from a tight angle.

The result sent Rovers eight points clear with a goal difference so good it is worth another one. On another night, it might all have seemed devastating to Dundalk and their supporters. Just now, though, they find themselves with bigger fish to fry.

1 Seán O’Brien: Anger over my parents’ break-up never left me
2 Plenty of positives for Farrell as Ireland hit the ground running
3 Will Connors chops his way to the front of Ireland’s openside queue
4 Madness or defiance? The GAA is taking a huge gamble in staging Championships
5 America at Large: Hurling fan Dowling leading the fight against Covid-19
Real news has value SUBSCRIBE