Jeff Hendrick bedding in to life at the top 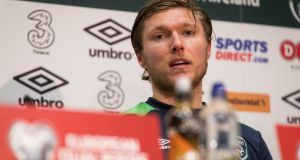 Jeff Hendrick. ”I don’t see a reason why I can’t keep learning and improving over the next few years.” Photograph: Ryan Byrne/Inpho

Scarcely half a season after moving to Burnley and starting to test himself on a weekly basis against the best players in England, Jeff Hendrick believes he is still growing into his role as a Premier League and international footballer. Wales, though, will be wary, having watched his highlights for 2016.

“It’s a big step up,” says the Burnley midfielder. “You’re playing against better players week in, week out, but I felt I was ready and it was time for that, especially after the summer playing in big games for Ireland.

“I feel like I played well at the Euros and the games leading up to it. I got into the Burnley team straight away and was doing alright for the first few games, but I kept training hard and the confidence grew inside me and the performances got better.”

At club level, he has benefited from not playing so much, with the punishing Championship cycle of match and recovery replaced with a schedule that leaves him a little time between outings to reflect on how he has done, work on his game, then prepare himself properly for the next one.

“I do like to score goals and even during games I do get forward a bit more without even thinking about it, trying to get into the box to score more goals. It is something that I want to do. I have talked about it now for a few months since that game [Serbia, where he scored his first goal for Ireland] and hopefully I get a few more for the country and the club.”

On this occasion, he admits, however, much will depend on where he needs to be and whether he is asked to drop deeper and, in the possible absence of James McCarthy, partner Glenn Whelan in front of the back four.

“I think I’m still growing, though. I feel like I’ve learned an awful lot in the last year and I don’t see a reason why I can’t keep learning and improving over the next few years. I’ve just turned 25, I’m one of the youngest here, so there is more to come from me. I keep pushing myself every day and every week, trying to get better and trying to improve my game and hopefully we see the benefits of that in the next few years.”

Ideally, of course, we might see some of it tomorrow night.