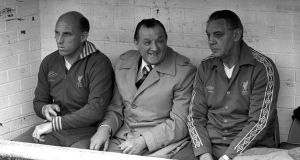 Former Liverpool captain, coach and caretaker manager Ronnie Moran has died at the age of 83.

Moran made 379 appearances between 1952 and 1968, scoring 17 goals, but arguably played as big a role as part of Bill Shankly’s famous Boot Room.

Having played for the Reds boss he was then invited by the Scot to join the coaching team and Moran twice filled in as caretaker manager during 49 years of service at the club.

“Liverpool Football Club is deeply saddened by the passing of Ronnie Moran,” said a statement from the club.

Moran’s son Paul wrote on Twitter: “I am devastated to tell everyone on behalf of the family that my dad passed away this morning after a short illness.”

Born in Crosby, Moran’s playing career at Anfield began in 1949 when he joined as a part-timer while serving as an apprentice electrician and eventually signed professional forms for his home-town club shortly before his 18th birthday in January 1952, making his first-team debut the following November.

He made the left-back position his own over the next decade or so, winning two league titles and the FA Cup before Shankly invited him onto his backroom team, although Moran continued playing for the reserves for a further two years before formally retiring from playing during the 1968-69 season.

He guided the Reds’ reserve team to the Central League Championship in 1972-73 and became a valued member of the Boot Room, working under Shankly, Bob Paisley, Joe Fagan, Kenny Dalglish, Graeme Souness and Roy Evans.

During that time he was twice called upon to become caretaker manager: once after Dalglish’s resignation in 1991 and when Souness was recovering from his triple by-pass heart surgery in 1992.

He finally retired in 1998 and was rewarded with a testimonial match against Celtic in 2000.

Moran remained a regular visitor to Anfield and was a familiar face at the club’s Melwood training ground during his daily jog around the field.

Four years ago he was diagnosed with vascular dementia and last October his family took the difficult decision to admit him to a care home where he could receive 24-hour care.