Rochestown school get the better of Rice College, Westport in schools’ final 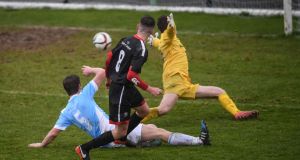 The midfielder was guilty of squandering a litany of openings, especially a couple of free headers from set-pieces, before finally applying a neat finish towards the end of a tense contest at Whitehall.

Rice College from Westport had remained competitive for much of the contest, but ultimately fatigue told as they were forced to play almost all of the second half a man light after Cian McAllister had been sent-off for a second yellow card.

The Mayo team had mustered a couple of chances with the game scoreless through Jack Murphy and Paul Doyle, yet were holding on for extra-time when the breakthrough came.

Substitute Ross Slevin picked out the unmarked Walker with a pass on the right side of the penalty area, and the Cobh Ramblers talent slotted the ball past the advancing Patrick O’Malley.

The Munster champions can make it a double next Wednesday when they face St Eunan’s in the Under-17 decider. Slevin and Rory Doyle will be chasing their second national title in the space of a week.

1 Stirling and Balbirnie tee off to tee up another famous Ireland win over England
2 RG Snyman primed for hectic run with Munster and South Africa
3 Seán Moran: Boylan documentary offers a compelling insight into former Meath boss
4 ‘A win like that is special and one we’ll remember forever’ - Ireland skipper Balbirnie
5 Restrictions threaten 147 unbroken years of Irish athletics history
Real news has value SUBSCRIBE
Crossword Get access to over 6,000 interactive crosswords