Kevin Doyle coming from a heatwave to slay a dragon 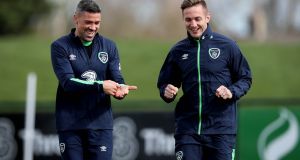 Now that he calls Colorado home, if there was any player training at Abbotstown on Tuesday morning who’d have found the wind chill factor a doddle you’d imagine it would have been Kevin Doyle.

“I should be used to it, but there’s a heat wave – it was 25 degrees for the last two weeks in Denver. We should have snow, so it must be global warming, or whatever.”

He’s had a generous helping of sun on his back, then, for the past couple of months after a fortnight in Los Angeles and three weeks in Tucson, Arizona with the Colorado Rapids for pre-season.

The new Major League Soccer season got under way on March 4th, Doyle featuring in a home win over New England Revolution, but after experiencing headaches he missed out on the game away to New York Red Bulls.

“It was concussion, but I was fine. You have a scan, you have to pass a test. I do well to pass it at the best of times, it’s a memory one. You look at pictures and words and you have to remember them five minutes later. For a week I wasn’t feeling great. I had a headache, I put it down to flu or whatever.

“But I played our first game of the season, I had a lot of headers, the headaches got worse. I’d got a bang in our last pre-season game, I had a sore neck, it turns out it was a delayed reaction to the concussion, so I had to sit it out for 10 days.”

The care taken now, he says, over players suffering from concussion is in stark contrast to the days before such an emphasis was placed on its dangers.

He insists, though, that he’s fully recovered and ready to be called upon if required on Friday. With Daryl Murphy now out of the game through injury, leaving Martin O’Neill with more limited back-up options for Shane Long and Jonathan Walters, he reckons his chances of involvement have increased.

“More of a chance than I’d have had a week ago anyway,” he says. “And I’ll be fine, fitness-wise I will be fresh.”

He’s reminded that he came on as a substitute when Ireland played Wales at Croke Park 10 years ago, having thought he’d missed the game through injury.

He remembers Gareth Bale from back then, though.

“I recall seeing him and thinking he was class. He was nearly coming to us on loan at Wolves in one of the transfer windows, so that shows how far he has come. He’s an unbelievable player, one of the best in the world now.

“It’s that natural speed, he’s there winning headers in the box, his leap and timing, he’s got everything. If you can curtail him, it would make a big difference. You certainly don’t want to be giving away silly free-kicks.”

1 Rory McIlroy puts integrity ahead of glory in US PGA second round
2 Buttler and Woakes drag England from the brink to set up thrilling Pakistan win
3 Bayern Munich complete formalities with rout over Chelsea
4 From Maestro to Mister: Andrea Pirlo named new Juventus boss
5 The game they loved so well: How cricket united Hume, McGuinness and McCann
Real news has value SUBSCRIBE
Crossword Get access to over 6,000 interactive crosswords