Improving Ireland look to take next step against Norway 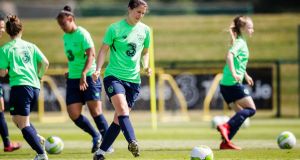 Ireland will likely have to beat at least one of Norway and the Netherlands to qualify for their first ever World Cup. Photograph: Ryan Byrne/Inpho

Ireland could play their way back into serious contention for a spot at what would be their first World Cup by beating Norway in Tallaght on Friday evening.

They have already done enough over the course of the campaign so far to suggest that some significant progress is being made under manager Colin Bell, but taking three points from Martin Sjögren’s side would comfortably eclipse anything they have achieved so far.

Bell suggests that two draws would, notionally at least, maintain Ireland’s hopes of progressing through the play-off. However, after losing at home to the Netherlands, he has previously acknowledged that his side are going to have to beat one of the group’s more obvious top two if they are to do more than go out at this qualification stage with their reputation enhanced.

With just the top side progressing automatically, however, and only four of seven runners-up making those play-offs, the Norwegians have little room for manoeuvre after losing to the Dutch themselves away and Bell believes they see this as another step towards a showdown with the European champions in September’s final round of games.

“Their plan is to get six points against us, beat Slovakia and then they’ve got a ‘final’ against Holland,” he says. “But we are not just going to lie down and say: ‘You two nations sort it out amongst yourselves.’ We want to make a mark and we need to make a mark where they theoretically start thinking, ‘We might not finish second’. That’s where we have to get into their heads.”

He talks about the need to avoid the sort of mistakes that led to the goals against the Dutch, or to make them further up the field, and the hope will surely be to pose much more of a threat than in April when Ireland managed just one attempt on goal.

They will have to cope with 23-year-old Wolfsburg winger Caroline Graham Hansen who has averaged about a goal every three games over the course of her international career but has five in four in this campaign.

Diane Caldwell, who has previously played in Norway, knows Hansen well through their club encounters in Germany and is clearly an admirer but, she insists, the hosts will not be overawed even if their visitors arrive with high expectations.

“She’s a class player,” she says of Hansen, “one of the best female footballers in the world, probably the best dribbler in the game. I’m well aware of how good they are as players, I played in Norway for four years, so I know all about their strengths but I’m well aware of their weaknesses too.

“They’re going to be looking at little Ireland and not expecting too much from us. But they know it will be a fight, they’ll know they’re up for an aggressive battle. They know it will be tough but I think they’re confident that it’s an easy six points for them.”

With so much having changed off the pitch in the wake of Bell’s arrival and their own protest, Caldwell insists there are no excuses but the scale of the challenge remains daunting. The team will be weakened by the continued absence of long-term injury victims Megan Campbell and Stephanie Roche while Bell says Heather Payne, who is sitting her Leaving Cert would have started.

Harriet Scott seems set to narrowly miss out, meanwhile, as she battles her way back from a long lay-off with a broken collarbone and the hope is to have her fit for the return game in Stavanger on Tuesday. There was better news yesterday with regard to Niamh Fahey and Marie Hourihan, both of whom trained and are expected to start.