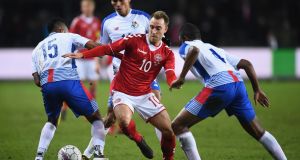 Christian Eriksen can carry Denmark into the last-16 in Russia. Photograph: Michael Regan/Getty

Of all the sobering nights for Irish football, last November’s 5-1 playoff trouncing at the hands of Denmark is up there as one of the worst. Martin O’Neill’s men – and much of the nation – headed into that fixture with genuine hope they were on the verge of making it to a first World Cup since 2002. Belief Ireland were equal to the Danes was boosted by a first leg 0-0 draw in Copenhagen – before the illusion was comprehensively shattered in Dublin three days later. That Christian Eriksen-inspired evisceration provided a glimpse of what Denmark are capable of – demonstrating a serious goal threat and a ruthless streak which could see them progress beyond the group stages in Russia.

Age Hareide’s side is, understandably, built around Tottenham playmaker  Eriksen, who scored 11 goals in 12 games during qualification. Possession of a bonafide world-class player raises Denmark’s stock above some of the tournament’s other lower-middle tier sides, but they are slightly more than a one-man band. The Danes are defensively solid – captain Simon Kjaer is a 76-cap veteran at 29, and his excellent range of long passing from the back facilitates a more direct style of play, with Nicolai Jorgensen and Andreas Cornelius leading the line. The Danes are not just long-ball merchants however, and it would be interesting to see Ajax starlet Kasper Dolberg add to his four caps this summer.

Denmark’s greatest team – the Danish Dynamite who won the European Championships in 19992 – failed to qualify for the 1990 and 1994 World Cups. However, the Danes made it to the quarter-finals in 1998, thrashing Nigeria 4-1 in the last-16 before losing 3-2 to a Rivaldo-inspired Brazil in the last eight.

The Danes finished a comfortable but distant second in their qualification group, trailing winners Poland by five points and qualifying for the playoffs. We don’t need to revisit what happened next.

Age Hareide was a team-mate of Martin O’Neill’s at Norwich City in the 1980s, and he spent two years at Norwich City before returning to Molde. The Norwegian has been in the role since 2015, and has moulded a well-organised outfit who are obviously reliant on Eriksen but have developed further strings to their bow.

Christian Eriksen has continued to flourish this season and is the heart of the Danish side. The 26-year-old is a diminutive but deadly passer, goal scorer and deadball specialist.

Kasper Dolberg is touted as one of the hottest young prospects in European football, and while he recently had a quieter season for Ajax the 20-year-old striker continues to be linked with a move to the continent’s super powers.

The Danes look the best equipped side to emerge from Group C along with France, although the last-16 is probably the best they can hope for.

1 Six Nations: No place to hide for Ireland’s misfiring captain
2 Ireland left in championship dogfight after being bullied by England again
3 England 24 Ireland 12: How the Irish players rated at Twickenham
4 Liam Toland: Astute kicking game helps England establish a stranglehold
5 Ken Early: Guardiola eyeing what could be a last chance for European glory with City
Real news has value SUBSCRIBE
Crossword Get access to over 6,000 interactive crosswords