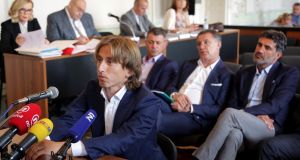 On Wednesday afternoon, Zdravko Mamic, considered the most powerful figure in Croatian football, was found guilty on a set of charges that includes making illegal personal profits on player transfers from Dinamo Zagreb. The county court in Osijek ruled that the players in question, namely Luka Modric and Dejan Lovren, were unlawfully paid 50 per cent of the transfer fees that Dinamo received for their services from Tottenham Hotspur and Lyon respectively, only to forward most of that money to Mamic, who was a Dinamo executive at the time, and his family.

So how they do it?

Mamic signed personal contracts with many players during their early development years, obliging them to share their earnings with him. In most cases, those players were represented by Mamic’s son Mario, a licenced agent. Meanwhile, acting as club executive, Mamic would put clauses in the players’ contracts specifying the split of any transfer fees between them and the club. Once they received that money, they would pay Mamic off.

That much has not been disputed, even by Mamic’s defence. What the prosecution set out – and, according to the court ruling, managed – to prove was that in the case of Modric and Lovren those clauses were added and backdated after the players had been sold.

Mamic was sentenced to six-and-half years in jail. His brother Zoran, head coach at the United Arab Emirates club Al Ain FC, received four years and 11 months. Damir Vrbanovic, the former Dinamo executive and now the executive director of the Croatian Football Federation, was given three years. For the ruling to become final it has to be confirmed by the Superior Court and that could take years. The defendants, who have denied all charges, also have the right to appeal, but Croatian law specifies that jail terms are effective immediately for any sentence of five years or higher.

None of the three men were present in court to hear their sentences. In fact, Mamic was already in Bosnia and Herzegovina, where he fled on the eve of the verdict. He holds dual citizenship and the country is not obliged to extradite him. Just after the sentence was announced, he held a press conference in his new home there, stating he has no intention of coming back. “I am not a coward – but not a masochist, either,” Mamic told the reporters, stating that he will fight the ruling.

For years Mamic held key positions both at Dinamo and in the football federation, although he was forced to officially withdraw from them during the court case. Over time, he weaved a web of influence spanning far beyond football. He has friends in high places – politicians, judges, owners of media conglomerates, even police officials.

The Croatian Football Federation has declined to comment on the verdict until it is final and Vrbanovic, shockingly, gets to keep his position there.

Among the many questions regarding how the verdict will affect Croatian football, its influence on the national team, due to travel to the World Cup in just a few days, is one of the most intriguing. Modric, the national team’s captain, has already been charged with perjury in the Mamic case: during the investigation he asserted that the money split clause was added to his Dinamo contract only after he had been sold to Tottenham, but he changed his testimony in court saying the investigators had confused him and that the annex to his contract was signed much earlier.

The trial date has not been set but the Mamic ruling supports the contention that Modric was not telling the truth, and if found guilty the Real Madrid midfielder could be facing six months to five years in jail. Lovren, who faced Modric in the Champions League final in Kiev last month, is being investigated for giving a false testimony as well and is expected to be charged.

Both Modric and Lovren refused to comment, but one can only imagine what this means for the mood in the squad heading to Russia, where they are in group that includes Argentina, Nigeria and Iceland. Speaking on Wednesday, Mamic said he would “admire” Modric and Lovren if they “can now proceed to play at the World Cup”, before asking: “How will they find the strength when they know what the state has done to me?”

There are others in Croatia’s World Cup, including Sime Vrsaljko and Mateo Kovacic, who had similar contracts with Mamic. And then there is Andrej Kramaric, the highest-profile case of a player who refused to sign with Mamic. Rumours of a lack of togetherness in the squad have been present for years, despite the federation’s extremely protective stance and a very limited access to players for the reporters, and it seems even more unlikely that they will come together around a joint cause in Russia.

Domestic fans have been warning about corruption and wrongdoings in Croatian football for years, sometimes resorting to desperate measures such as interrupting matches, the most famous example of which took place during the Euro 2016 group game against the Czech Republic in Saint-Etienne. A bright red flare landed on the pitch to the left of Petr Cech’s goal before another soon followed. At least 15 were thrown in total before a small group of Croatia fans ran on to the pitch at the Stade Geoffroy Guichard and attacked their own players.

That may be only a radical minority, but there are many more of those who no longer can muster enthusiasm for the national team – and really, who can blame them? – Guardian service