Richard Scudamore to stand down as Premier League executive chairman 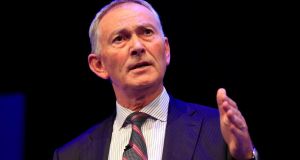 Executive chairman Richard Scudamore is to stand down before the end of the year, the Premier League has announced. Photo: Brady/PA Wire

Richard Scudamore has announced his intention to stand down down as the Premier League’s executive chairman at the end of this year.

Scudamore has been an influential figure in overseeing the English top-flight’s expansion during his 20 years in charge.

His decision comes on the same day the league’s ‘big six’ clubs won their fight to take a bigger share of the top tier’s booming international broadcasting revenue.

Commenting on his decision, Scudamore said: “It’s an absolute privilege to have been allowed to enjoy this role for so long, it is too much fun to be called a job.

“Football is an intoxicating environment and therefore difficult to give up being so involved, but my passion for what football means to so many and the positive impact it can make will never diminish.

“This past 20 years would not have been possible without the continuing support and encouragement of the clubs and the unstinting efforts of my colleagues at the Premier League, whose professionalism and dedication are only surpassed by their decency and sense of fun.”

The current three-year domestic broadcasting rights for the Premier League is worth £5.14billion, shared between Sky and BT.

Scudamore, who was chief executive from November 1999 to June 2014 before taking on his current role, was quick to pay tribute to the broadcasters that have helped the league’s success.

The 58-year-old reserved a special mention to Sky for being the “catalyst for the start of the Premier League journey” in 1992.

He added: “The Premier League is in great shape and the future is bright, of course there are still many things to improve and constant challenges, but that is what makes it so exhilarating.

“The clubs put on the greatest show; fans, such an essential part of that show, love it both here and around the world. Because it so compelling, the league’s success will continue under new and reinvigorated leadership.”