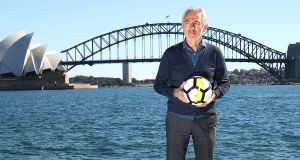 Two weeks after making it to Russia on the back of a mammoth qualification campaign, Australia boss Ange Postecoglou resigned from his post. The 52-year-old said his decision had been made in the immediate wake of the Socceroos’ playoff victory over Honduras, saying his four-year tenure had “taken a toll on me both personally and professionally”. Postecoglou’s resignation means Australia head to Russia in a state of flux, former Netherlands manager Bert van Marwijk the man taking them to their fifth World Cup. This managerial turnover has hardly helped stir any sense of great expectation down under, and it is accepted Australia are the weakest relation in Group C.

Despite this, Van Marwijk still has some good players at his disposal – particularly in midfield. Aston Villa’s Mile Jedinak captains the side, and he is joined in the middle by Huddersfield Town’s Aaron Mooy. QPR’s Massimo Luongo has also become a key player for the national side, while Tom Rogic enjoyed another fine campaign at Celtic and will link the midfield and attack. However, Australia look weak going forward, and they remain heavily reliant on 38-year-old Tim Cahill, who scored 11 goals during qualification. There is also a lack of experience in defence.

The Socceroos have made it to the World Cup four times and progressed to the knockouts in 2006 where they faced eventual winners Italy in the last-16. Australia were level until the last minute when Lucas Neill was harshly judged to have taken down Fabio Grosso in the box, and Francesco Totti converted a penalty with the last kick of the game to send the Azzurri into the quarter-finals.

Australia were the penultimate team to qualify for Russia and they had plenty of travelling to do to secure their place. They came third behind Japan and Saudi Arabia in an AFC group which also contained the UAE, Iraq and Thailand – before beating Syria and then Honduras in two playoff fixtures.

Bert van Marwijk was only appointed in January, so he has had little time to mould his team before the World Cup. The Dutchman steered Holland to the 2010 final, however, so he has the credentials – expect defensive improvement from the Socceroos.

Aaron Mooy enjoyed a fine season for Huddersfield Town, helping the Terriers secure Premier League survival. The 27-year-old is a late bloomer, but offers a touch of genuine class in the middle.

Tom Rogic has become a key player for Celtic as they continue to dominate in Scotland, and will be key in linking Australia’s midfield with attack. He is excellent at picking up the ball in pockets of space on the turn and driving at the defence.

It is hard to see Australia progress to the last-16 – springing a surprise on Peru or Denmark is the best they can hope for.