Ireland Under-17s get Euros back on track with Denmark win 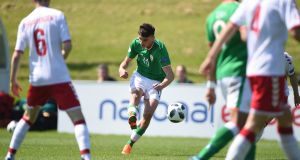 The Republic of Ireland are back in the hunt for a place in the quarter-finals of the Under-17 European Championships after Troy Parrott’s early goal gave them victory over Denmark at St George’s Park on Tuesday afternoon.

Having lost their group opener to Belgium on Saturday, Colin O’Brien’s side needed a response and Tottenham striker Parrott provided an early intervention by catching goalkeeper Daniel Andersen out with a speculative shot from the edge of the box which flew past the keeper drafted in after Saturday’s defeat to Bosnia-Herzegovina.

While the Danes enjoyed their spells of possession, they failed to test Jimmy Corcoran in the Ireland goal and instead Parrott and Adam Idah fashioned the best opportunities to extend Ireland’s winning margin.

Victory means that Ireland will be guaranteed progression to the last eight if they overcome Bosnia-Herzegovina in Friday’s final Group C fixtures.

“This game was a battle at times but I thought we created enough chances in the second half to have made it a little easier in the end,” said Ireland manager O’Brien afterwards.

Parrott, who is still young enough to play at Under-16 level, gave the watching Martin O’Neill and Roy Keane something to ponder by unleashing a shot after just five minutes which embarrassed the goalkeeper.

The game then developed into a scrappy affair but Nathan Collins at the back for Ireland ensured the Danes had limited opportunity of testing Jimmy Corcoran.

When the defence was finally exposed 10 minutes before the interval, Muamer Brajanec opted to shoot from the edge of the box and so give the Cherry Orchard stopper time to get down and block the effort.

Rather than being under-siege in the second half, apart from a couple of set-pieces which they comfortably dealt with, Ireland conjured a series of openings to kill the game.

Firstly, substitute Barry Coffey intercepted a crossfield pass and his first-time shot was turned around the post before Adam Idah smashed over from an acute angle.

The best chance of adding a second, however, fell to Parrott but he couldn’t repeat his heroics, instead blazing over from a pinpoint Idah cross.

Belgium face Bosnia-Herzegovina in the other Group C game to be played later at Burton Albion’s Pirelli Stadium (7.0pm).

1 Bundini Brown: The man who invented ‘float like a butterfly, sting like a bee’
2 Worst sporting moment: White knuckle ride on a hate-filled night at Windsor
3 Australia in pole position to secure 2027 Rugby World Cup
4 He Knows No Fear lands 300-1 shock at Leopardstown
5 Three clubs will take a knee when English Premiership rugby resumes
Real news has value SUBSCRIBE
Crossword Get access to over 6,000 interactive crosswords