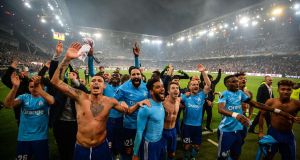 Marseille’s dramatic extra-time decider which denied Red Bull Salzburg a place in the Europa League final was a “bitter pill to swallow”, the Austrian side’s sporting director has admitted.

Substitute Jorge Rolando volleyed home from a corner in the 115th minute to snatch a 3-2 aggregate victory for the French side, after Salzburg had earlier cancelled out a 2-0 first-leg deficit at Red Bull Arena.

Salzburg will feel aggrieved at the way they exited the tournament, with the corner which led to Rolando’s goal being awarded despite Andre-Frank Zambo’s 20-yard effort deflecting behind off a Marseille team-mate.

The home side’s players protested the decision but the referee was unmoved and Rudi Garcia’s side made the most of their lucky break to secure Marseille’s first European final appearance since 2004.

He is quoted by Uefa as saying: “The disappointment is huge . . . To fight back like that, to be the better team, it’s a bitter pill to swallow but that’s football. We have to accept it and learn from it.”

Forward Fredrik Gulbrandsen told the organistation’s website the team had done “everything we could”.

“To go out in this manner is horrible,” he added. “Our dream has died. We can be proud, it’s just hard to focus on that right now.”

Amadou Haidara, who had started Salzburg’s fightback with a fine individual effort before Bouna Sarr’s own goal levelled matters, was sent off late on as the Austrian team’s hopes ended in frustration and failure.

It was tough on Salzburg, who had looked set to stage another memorable recovery having turned a 5-2 aggregate deficit against Lazio into a 6-5 victory in the quarter-finals.

Marseille are now gearing up for a Europa League final showdown with Atletico Madrid in Lyon on May 16th.

Forward Florian Thauvin forward said their achievement had still not sunk in.

“It’s incredible and we’re in the final but we haven’t realised it yet,” he said. “It’s magnificent. We’re going to try to win another European trophy.”

Defender Adil Rami hailed the side’s “strength of character”, telling the Uefa website the final would be a “great experience for the Marseillais”.