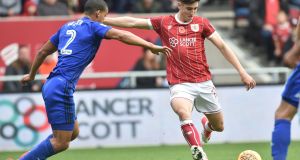 With leaders Wolves having won on Friday, Cardiff missed the chance to keep pace as they went down to Bristol City, but there were no such slip-ups from the Blades.

A cracker from Kamil Grosicki put Hull in front against Chris Wilder’s men, but Clarke fired in four goals in 30 minutes for a comprehensive 4-1 win.

Republic of Ireland winger Callum O’Dowda put Lee Johnson’s in-form side ahead after 20 minutes with his first league goal for the club, but Omar Bogle replied four minutes before the break.

Bogle saw red 10 minutes after the break for a late challenge on Marlon Pack and not long after that Flint sealed a 2-1 win.

Wolves lead the way on 35 points, with Sheffield United on 33 and Cardiff on 31.

Managerless Sunderland, who play Middlesbrough on Sunday, are bottom after results went against them.

Bolton stunned Norwich 2-1 thanks to goals from Gary Madine and Adam Armstrong – Josh Murphy replied – while Burton won 1-0 at Millwall, with Marvin Sordell on target.

Birmingham’s struggles continued as they were beaten 2-0 at Barnsley, Tom Bradshaw and Zeke Fryers on target.

Liam Moore (nine) got them off to a fine start and Sone Aluko made it two (13). The goals kept coming thanks to Roy Beerens (54) and, even though Jonny Russell pulled one back (71), Mo Barrow added a fourth (75).

Sheffield Wednesday stunned Aston Villa with a 2-1 win at Villa Park. Adam Reach’s first-minute stunner set Wednesday on their way and, as John Terry went off injured for Villa, Jordan Rhodes doubled the lead before Chris Samba scored with no time left.

Nottingham Forest had too much for QPR, beating them 4-0 at the City Ground.

The game was firmly under the Reds’ control by the break thanks to goals from Tyler Walker (13) and Kieran Dowall (20) before Barrie McKay added a third in the second half. Walker, the son of Forest great Des, made it four late on.

Ipswich subjected Preston to a 3-0 loss at Portman Road thanks to Martyn Waghorn, David McGoldrick and Bersant Celina.

In the day’s late game, Leeds were soundly beaten at Brentford.

In between, Ollie Watkins missed a penalty for the home side, before Yoann Barbet and Ryan Woods wrapped up a 3-1 win.