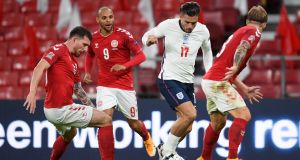 Pre-season is a time for experimentation and that is precisely what this was. A result that dented England’s Nations League aspirations was an unwanted part of the equation – Belgium, who beat Iceland, are now in charge of the section – but with so much being seen through the prism of the European Championship finals at the end of the season, what could Gareth Southgate learn here?

The short answer was that he saw too much to trouble him, particularly during a tepid first half, and not enough to encourage. Southgate road-tested a 3-4-3 formation, which got a little tighter in the second half and created a platform for some chances but England could not make the most of their limited crop.

After Raheem Sterling’s penalty edged them to a 1-0 win in Iceland on Saturday, a trip that was undermined by Phil Foden and Mason Greenwood being sent home for bad behaviour off the field, the team once again failed to score in open play.

Apart from a stoppage-time Harry Kane opportunity, when he rounded Kasper Schmeichel only to see his shot cleared off the line by Mathias Jørgensen, England did not create anything of gilt-edged note. It was Denmark that did so and Southgate’s team rode their luck at times. The manager has much to ponder, not least the identity of his best midfield.

England had known that the Danes were smarting from their 2-0 loss here to Belgium on Saturday and that it had been a rare reverse. Before kick-off, the hosts could count their defeats since November 2016 on one hand – and one of those had been on penalties to Croatia in the last 16 of the 2018 World Cup.

Denmark’s passage to the European Championship finals had featured no losses and only six goals conceded while their line-up was studded with players at prominent clubs. England had to expect a tougher test to Iceland and they got one.

It was all new for England, the 3-4-3 a subtle deviation from the 3-5-2 with which they had enjoyed success at the World Cup and designed in part to encourage Jadon Sancho and Sterling into space in the channels, with the wing backs providing the width.

It felt as though the priority in the first half was familiarisation and to keep the shape, with the debutant Conor Coady in the middle of the back three, particularly vocal in getting his line to squeeze up. But there was little to get excited about from an attacking point of view.

Trent Alexander-Arnold has the mindset to thrive at right wing back and he made himself available for the long diagonals. Coady picked him out with a lovely one in the 10th minute only for the Liverpool player’s touch to be loose, although he did win a corner. From it, England had their only flicker. Kieran Trippier pulled it back low and Sancho had the space for a shot. He did not get hold of it.

England’s first-half performance was stilted and one-paced, with the central midfielders, Declan Rice and Kalvin Phillips, another debutant, struggling to impose themselves going forward, which was always likely to happen given they are holding players. They were tidy but the gap to the front three was often large.

England frequently by-passed them, going long, particularly for Alexander-Arnold, who got into a couple of decent crossing positions. But it was very predictable and Denmark reached the interval having been untroubled. Schmeichel, as always, did plenty of shouting and a bit of needling the referee. The fan-free stadiums have really allowed his voice to carry. But he had nothing else to do in terms of stopping shots. England’s creativity was zero.

Denmark created the chances in the first half and they would have been in front but for a smart Jordan Pickford block to deny Kasper Dolberg. Christian Eriksen had created the opening, turning away from his former Tottenham team-mate Eric Dier with ease, and Denmark could point to other opportunities.

Dolberg whistled a shot high, Martin Braithwaite flashed another one wide after a nice piece of skill and, in between, Yussuf Poulsen could not react quickly enough to convert a Daniel Wass cross.

England had to be better in the second half, more joined up and they did emerge as if affronted by how flat they had been. There were traces of urgency. Braithwaite had to spend a yellow card on Kane to stop him from bursting forward.

Southgate made a change on the hour and it was Mason Mount for Sancho, with the Chelsea attacking midfielder drifting between the right and a central area behind the strikers. Southgate wanted to prolong the experiment with three at the back and his screening midfielders for a little longer.

Denmark were less threatening after the interval and, slowly, England forced them back. Could they summon a moment of inspiration? Alexander-Arnold provided one with a sumptuous ball over the top for Mount only for him to fail to collect it. That was frustrating. Kane also headed over from a Trippier cross and worked Schmeichel with a low shot.

Southgate introduced Jack Grealish and Ainsley Maitland-Niles for debuts but it was Denmark who threatened . Eriksen blew the big chance, shooting high following a Poulsen nod-down, while the substitute, Simon Kjær, was also badly off target. – Guardian