The winners and losers of Stephen Kenny’s first international window 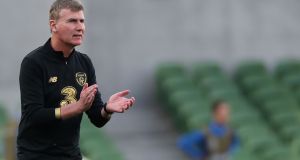 Republic of Ireland manager Stephen Kenny on the sideline during the Uefa Nations League game against Finland at the Aviva Stadium. Photograph: Niall Carson/AFP via Getty Images

The 19-year-old got his international debut in Sofia where he started and then kept his place for the game against Finland despite having struggled slightly to make an impact. Showed a bit more in the home game and seems set to get plenty of opportunities to grow into the role.

Having found himself stuck below Irish captain Séamus Coleman in the pecking order of the previous two managers, the now Spurs defender looks to have gained regular starter status. Kenny just needs to figure out how to allow him play his game now.

The striker’s start to life at this level was a bit of a rollercoaster with a strong showing after coming on late in Georgia followed by a disappointing first start in Switzerland. His inclusion in both of Kenny’s selections pointed to a higher status and he had his moments in both games.

A beneficiary of Kenny’s inclination to play a left-footed player on the right of his attack, the 25-year-old got almost as much international football in the past week as had done last year. Had a good first half in Bulgaria but tired there and was quiet on Sunday.

The Irish captain went from mainstay to onlooker. Has plenty still to offer for Ireland but opportunities are clearly going to be more limited unless Kenny decides to accommodate both him and Matt Doherty in the start line-up, which would almost certainly required a tactical switch.

The Southampton striker was passed over twice in favour of a striker with far less senior experience and though he got a run out in Bulgaria he made little impact. David McGoldrick’s appearance against Finland underlined Long’s position in the pecking order.

Hailed by Kenny’s predecessors for his commitment, derided by his critics for his persistent lack of composure; for many McClean was the best of the old Ireland or the worst of it. Kenny would never characterise it like that but the choice between the almost ever present Derryman and Connolly is a stark one and the new manager appears to have called it for now.

Played the 90 minutes in each game and scored Ireland’s only goal of the 180 but was still left on Sunday evening having to argue that he won’t be a long-term liability in the new system. His presence at attacking set pieces is a big part of the case for retaining him but admitted himself that he needs to adapt.