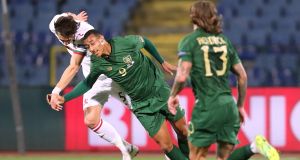 First impressions can be short-lived things: just cast your mind back to Eamon Dunphy hailing Steve Staunton when Ireland beat Sweden so well in his first game in charge.

To date, though, Stephen Kenny has given the sense of a manager who knows his own mind but might still be getting to grips with the limitations of some of the players he has inherited. He, and we, will know more after the visit of Finland, a nation Ireland has never lost to, although the last of five meetings was so long ago that Robbie Keane’s goal was only his 14th in international football . . . just barely finding his feet really.

Thursday’s game was by no means a disastrous start for Kenny, particularly given the scale of change envisaged, and the late arrival of the Irish equaliser will have dampened whatever sense of disappointment there might otherwise have been that the game was not won. It has also thrown up issues, however.

In attack, Adam Idah showed promise but still looked like a player lacking the sort of experience that might enable him to make more of an impact at this level. Perhaps against opponents that left more space to run into, his pace might have proven to be a bigger factor but, as it was, he had his work cut out against a couple of very experienced defenders.

Idah will, to be fair, be better for the experience, and the most obvious alternative ahead of the game, Shane Long, did little to make a fool of the manager after having come on with a quarter of an hour to play. The availability of David McGoldrick on Sunday, in any case, would solve the problem of who to start there – assuming the Sheffield United striker is fit enough to last an hour or more.

The problem in midfield is more fundamental, with Kenny’s suggestion that James McCarthy might anchor the team looking like a bit of stretch on the strength of the player’s first game for Ireland after a very long absence.

At his best, the Crystal Palace midfielder can be a decent performer, but he has never quite developed into the top-quality all-rounder that people predicted he would become when he was in his teens. Against Bulgaria, his passing was poor at times and he made little impact on the defensive side of things.

The 29-year-old can certainly re-establish himself as an important player for Ireland under Kenny, but the manager may be hoping for too much out of him as things stand.

At the back, there are problems too. It is no great surprise that Shane Duffy looks uncomfortable in a defence that is suddenly being asked to play its way up the pitch. And though rustiness may well have been, as he suggested afterwards, a part of the problem, he was caught badly out for the Bulgarian goal.

Sticking with a back four, meanwhile, undermines to some extent the argument for replacing Seamus Coleman with Matt Doherty, who had a decidedly quiet night in Sofia. The Dubliner might also be forgiven for feeling as though he should still be in his close season, but it is as a wing back he has made his name over the past couple of seasons, and so restoring the Irish captain to the team as a third centre back might have benefits on a couple of fronts.

It is hard to imagine there being change on any dramatic scale for Finland, though, and the more obvious question is whether the likes of Callum O’Dowda and Jeff Hendrick are replaced with fresher legs after appearing to fade as the night wore on on Thursday.

The Finns should provide another interesting test regardless, with Markku Kanerva’s side having been sufficiently impressive through the early stages of their Euro2020 campaign to qualify rather comfortably despite losing a couple on the road late on.

Teemu Pukki’s 10 goals helped, of course. The striker makes terrific runs when the team breaks and is a very versatile finisher when opportunities arise in a more crowded area, but Thursday was not a great night for him or his team-mates, with the hosts unable to get a single shot on target in their 1-0 defeat by what was a young Wales side.

The visitors come with a bit of Irish flavour in the form of Daniel O’Shaughnessy, the HJK defender whose father came from Galway. The greater Irish interest will be in winning, however, with little enough scope for dropping points at home if, with the Welsh still to come, top spot in the group is to remain an achievable ambition.