Foden and Greenwood’s youth does not excuse them. They know the rules 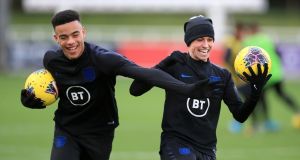 The starting point in the analysis of the latest off-field England crisis, sparked by the decision of Phil Foden and Mason Greenwood to invite two women into the team hotel in Iceland – in breach of Covid-19 protocols – was provided by Gareth Southgate.

The England manager said he had spoken to them before breakfast on Monday about what had happened the day before. “It was as much as anything to establish exactly whether they had put themselves in that situation,” he said. “And then to inform them that they needed to stay separate from the rest of the team and that we would need to deal with things appropriately to get them back to England.”

Southgate was able to establish that Foden and Greenwood had indeed put themselves in the situation – one that potentially jeopardised the sanctity of the squad’s biosecure bubble, not to mention showing a disregard for the quarantine procedures in place in the host country – and that they needed to leave the group before the game against Denmark on Tuesday.

In other words, Southgate could see that Foden and Greenwood had erred and, to use a phrase which he himself would trot out, it was a “very serious situation”. Which made the rest of Southgate’s tone during an uncomfortable media grilling rather curious.

When Southgate justified the decision to call up Harry Maguire last month as the defender’s trial in Greece for aggravated assault and attempted bribery was ongoing, he leant on the principle of innocent until proven guilty. He was also keen to show his support to a key player at a difficult time. The situation changed sharply when the court in Syros found Maguire guilty of the charges, albeit pending a retrial with Maguire strenuously denying wrongdoing, and Southgate moved to stand him down.

The difference with Foden and Greenwood is they are guilty of the indiscretion, they have been expelled from the squad and yet Southgate appeared reluctant to criticise them. He even seemed to suggest the decision to send them home was effectively out of his hands; it was imposed on him by the protocols and their having been compromised rather than any anger he might have felt at being let down by the players or even appalled by their behaviour.

Foden and Greenwood are 20 and 18, respectively, but their youth does not excuse them. They know the rules. They are not difficult to understand or follow.

As Southgate spoke Foden’s club, Manchester City, released a statement that condemned his behaviour as totally inappropriate. Greenwood’s club, Manchester United, said they were disappointed in him, while the English Football Association described the players’ breach of the Covid-19 rules as “unacceptable” and betraying a “serious lack of judgment”.

The strongest Southgate went was to call them naive. He said on more than one occasion that he needed to establish the full facts but surely he had what he needed? “I have obviously got to try and speak with them later in the appropriate way,” he said.

Was he angry? “My reaction whenever a situation like this happens is to make sure we establish the best route forward and the best decisions – nothing else,” he said.

Had Foden and Greenwood damaged their chances of selection in the future? Southgate said it was too early to say. Was he supporting them because they stood to be such important players for England in the future? “We are following the guidelines that are there,” he replied. “We have separated them from the team. Everything else needs some time to sort through the situation and decide how we deal with it.”

Southgate ought to have been talking about the Denmark game, how he intends to road-test a 3-4-3 system and give debuts to Conor Coady, Ainsley Maitland-Niles and Kalvin Phillips. But for the England manager, it often seems as if winning matches is only a part of the deal.

Southgate remembers watching previous England managers, including those he played for, being scrutinised for every tiny decision and how no performance was ever good enough. He knew he would have to cope with that. But the rest of it has blown him away.

But on this occasion, as he trod the line between supporting his players in public and calling them out, he got the balance wrong. Perhaps his actions – or more, specifically, whether he will select Foden and Greenwood in the future – will speak more loudly.

Here, he needed to be harsh. The softer approach was not a good look. - Guardian