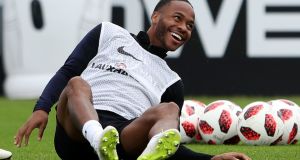 England’s Raheem Sterling during training ahead of their 2018 World Cup semi-final clash with Croatia in Moscow. Photo: Lee Smith/Reuters

Few political leaders can ever have needed the sort of distraction a big football win provides quite the way Theresa May does just now. On the face of it, at least, her prospects look good. England are full of confidence, have everyone fit for their semi-final at the Luzhniki stadium in Moscow and Croatia should be dead on their feet having been taken to penalties twice in a row.

But then things seem to work out well so rarely for the British leader that Gareth Southgate’s men will surely lose.

Jamie Vardy is available to the manager again after recovering from a hamstring problem but England are likely to be unchanged. The only question is whether Southgate opts to bring Eric Dier alongside Jordan Henderson in an effort to better contain Croatia’s midfield.

“We know how Croatia like to build, like to build possession,” he said at his pre-match press conference on Tuesday. “Their midfield players like to drop deep to pick up the ball; they have speed on the wings that we will have to deal with and there is an obvious threat from crosses.

“We know about the quality of their midfielders, their ability to pick a pass or score from distance if you allow them to shoot; we are very aware of the dangers they pose.”

That and the fact that Henderson picked up a bit of a hamstring strain in the win over Sweden might tempt the manager to make the change and the pair have certainly done fairly well together before. But there is a strong case for sticking with a settled side that worked well and beat Sweden comfortably on Saturday in Samara.

While England are enduring political turmoil back home, Croatia’s preparations have been hit a little bit here with one of the squad’s coaching staff, Ognjen Vukojevic, sacked and defender Domagoj Vida ‘sanctioned’ after posting a “Glory to Ukraine” video on social media in the wake of their defeat of Russia at the weekend. Both men used to play for Dynamo Kiev.

The hosts were annoyed by the gesture, the Croatians embarrassed and on another day the federation might have packed the player off home too. Not on the eve of a World Cup semi-final though. With regular right back Šime Vrsaljko ruled out by a knee injury, Vida is likely to be required to shift across from centre back in order to fill in for the absent Atletico man with Vedran Corluka expected to start in the centre.

At their very best here, the Croatians have looked more like potential finalists, even champions, than England. But after impressing in the group stages, most obviously in the 3-0 defeat of Argentina, both the Danes and Russians have found ways to make very life difficult for Zlatko Dalic’s side.

After two clean sheets initially they have conceded in each of their last three outings and England are bound to feel there will be opportunities, especially after the enforced change at the back. That said, if Luka Modric and Ivan Rakitic can settle into things and dictate the pattern of play in midfield then the English defence may well be tested in a way that it really hasn’t been so far.

Modric, Dalic says, is playing the best football of his career and the wider group is both ready and able to prove its real worth by moving on to the final.

“Our results have not been what they should have been for maybe a decade now,” Dalic says, “but it should be no surprise at all that we have reached the semi-finals with the players we have. This generation has been underrated for a long time because of the results but they have shown their value when it has mattered at this tournament. They know that by succeeding here they can ensure that they are remembered as a great generation.”

Southgate’s repeated emphasis on how the experience gained will stand to his players side in the future seems, by comparison, just a little downbeat although he insists they have already taken a great deal from the failures of the past.

“Our country has had a long time of suffering in terms of football,” he says. “Sometimes you have to go through difficult times and failures to learn and improve. There were a lot of young players involved in the team two years ago who suffered huge disappointments. We could have ignored that but we felt it was important to learn from it and so unpicked it a bit to try to find out exactly why it happened. Not just that, we’d had 10 years since we won a knockout game.”

That much, at least, has been addressed already and England are certainly in with a shout now of doing something they have not done for an awful lot longer. Even that might actually end up being bad for May, though. The decision that high ranking public figures would not attend games here looked harmless enough when it announced as nobody gave the team much chance of making a major impact. Now, England might make a final and she won’t be able to go. Perhaps they might go all the way after all.

1 Gerry Thornley: England primed to show their best against Ireland
2 Should fans be allowed drink in the stand at sporting events?
3 Stopping Jonny May’s pace must be high in Ireland’s priorities
4 Frank Lampard says Harry Maguire should have been sent off
5 Tipping Point: Eddie Jones’s rhetoric is out of place in a febrile political climate
Real news has value SUBSCRIBE
Crossword Get access to over 6,000 interactive crosswords