World Cup press conferences: where you have to question the questions 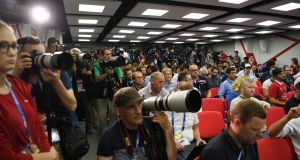 A news conference at Spartak Stadium in Moscow. World Cup press conferences are a daily piece of amateur theatre where the questions are often repetitive, the players are generally bored, and the managers find 50 ways to say nothing. Photograph: James Hill/The New York Times

No one expects scintillating Socratic dialogue or even normal reportorial discourse at a World Cup press conference. But even by the tournament’s relaxed standards, the opening remark to Russia’s manager the day before his team played Spain last week was unusually obsequious.

“I wanted to give you a small present,” a Russian reporter declared, springing to his feet. Opening a plastic shopping bag, he handed Stanislav Cherchesov what appeared to be a porcelain figurine of a girl with a disproportionally large head. “It’s called ‘Success’,” the man said proudly.

It was a weirder-than-usual moment in the routinely weird ritual that is the World Cup press conferences, a daily piece of amateur theatre where the questions are often repetitive, the players are generally bored, the managers find 50 ways to say nothing, and journalistic neutrality goes to the nearest bar, breaks open a beer and cheers for the home team.

Most professional sports have similar exercises, of course. Coaches and players are dragged out at some point – before a game, after a game – and forced to answer questions from a mob of reporters about strategy, preparedness and, inevitably, how they feel about whatever has happened or is about to happen.

“In some cases your greatest challenge is not to show how you feel about the question,” said Bob Bradley, who, as coach of the US men’s national soccer team at the 2009 Confederations Cup in South Africa, was asked at a news conference how the team was coping with the recent death of Michael Jackson before the final.

“It was said in such a serious way, as though everyone on the team was in mourning,” he said in an interview. “I went around the block trying to be diplomatic. I tried to be respectful of the question and not to say ‘this is not the time to be talking about Michael Jackson’.”

There are plenty of international tournaments with plenty of potential for missed cross-cultural signals. But the World Cup is unique in having so many participants from so many countries all appearing in the same forum, with the same ritualised regularity, match after match. After a while the press conferences, with their long-winded, multipart questions, their laughably imprecise simultaneous translations and their rigid, time-controlled formats, begin to seem like parts of one giant whole, their details spilling and flowing into one another.

The media is, in theory, meant to maintain a cool, analytical distance from the subjects it covers. Sure, you might be from Japan, or Brazil, or France, but, in the purist’s view, a reporter is supposed to behave like a citizen of the world of soccer for the purposes of reporting on a match.

Not so at the World Cup, where it is perfectly fine for reporters from a particular country to wear team jerseys to the stadium; to break into applause when a coach enters or leaves the room; to clamour for autographs or selfies; and to ask questions that are variations on the theme of “how great are you?” It is not uncommon to hear a questioner refer to the national team from his or her country in the first person plural.

When Colombia lost to England after a penalty shootout in the round of 16, for instance, the first three questions to Jose Pekerman, the team’s Argentine coach, were from members of the Colombian press corps. “Despite you being knocked out congratulations for the football that Colombia has played tonight,” the first questioner began.

“First of all, congratulations for getting this far,” the second said.

“You made us dream again,” said the third.

Occasionally the praise is tacked on to something else entirely, like a rider on an appropriations bill. The best example of this came when a reporter from Georgia, the former Soviet republic, addressed the Denmark manager Age Hareide after a painfully dull 0-0 draw with France that allowed the Danes to advance to the knockout rounds.

“This is the first match ending in a draw at this World Cup, maybe it’s the worst one so far,” the reporter began, before describing hearing boos and seeing disgruntled spectators leaving the stadium early. “What do you think about this? How do you assess the situation?”

Perhaps sensing Hareide looking a bit put out as the Russian-to-Danish translation came through his earpiece, the reporter quickly added: “Congratulations on the play-off and on further participation! Best of luck to you.”

Given a captive audience of journalists on deadline, managers often take the opportunity to wax elegant about the game, uttering what amount to a series of fancy banalities disguised as deep truths. “It’s true that this is a play-off, a life-and-death match, and there will be only one team going through,” Russia’s Stanislav Cherchesov said before his team played Spain. “If you lose you are out.”

Asked to comment further on Denmark’s 0-0 draw with France, Hareide responded with some random thoughts about the sport itself. “Football is an ongoing process. Sometimes you have to replace this or that player. You have to be able to handle playing different styles. You know, you need to do what you need to do in order to win.”

And Fernando Hierro, Spain’s manager, unleashed some important observations of his own in one particularly memorable non-answer. “In football there’s a fine line between winning and losing. It’s football, and football is sometimes like that.”

It’s a classic sports-reporter gambit – asking how a person feels when the answer should be fairly clear: generally you feel great, or you feel terrible, or you decide that how you feel is none of the questioner’s business.

Asked by a Danish reporter if he had a “message for the Russian people” before the tournament, Cherchesov, the Russian manager, lapsed into a bit of national-identity determinism. “You’re Danish? Danish from Denmark? Danish?” Cherchesov asked. “You would be hard-pressed to know the labyrinths of the Russian soul.”

More often the response is exactly what one might expect. Asked how he felt after his team was knocked out of the tournament, South Korea’s goalkeeper Jo Hyeon-woo put it plainly: “Of course we were disappointed, and so that’s why a lot of us cried.”

Mostly, though, the question just comes at the wrong time. Minutes after his team stunningly went out of the tournament on penalties in the round of 16 probably was not the best moment to ask Spain’s Hierro how he felt. “Well,” he snapped, “how do you think we’re feeling?”

One peculiar feature of this year’s World Cup has been the prevalence of elaborate questions from Russian and former Soviet republic journalists around one particular topic: “Do you like Russia? Why? What parts do you like? Can you talk about those parts that you liked?

“You already played at several stadiums in and visited several cities here,” began one such question to the England manager Gareth Southgate after a 6-1 victory against Panama. “Which city is the one with the best organisation, and which stadium is the best in terms of football and atmosphere?”

In Volgograd the questions had to do with the local bug problem. “How do you like the Volgograd stadium and the little flies?” a Russian journalist asked Nabil Maaloul, the Tunisian manager. “I did not feel the midges,” Maaloul responded.

Another reporter asked the England striker Harry Kane for his views on Volgograd and its pivotal role in the second World War, when it was called Stalingrad and was the scene of a bloody and decisive battle with deep emotional resonance for the Russian people.

“History is what it is,” Kane said.

What about Kazan? a reporter asked Didier Deschamps, the French coach. “Are there any peculiarities pertaining to the city which could be favourable or unfavourable for you?”

It was a hard question to answer given how little time he had spent in Kazan, but Deschamps tried. “I haven’t seen the city, really, or the museums. I don’t know what’s there because I went from the pitch to the hotel, and that’s it.” – New York Times

1 Larry McCarthy to become first overseas president of the GAA
2 Ryan Baird scores a hat-trick as blue wave rolls over Glasgow
3 Jack Byrne puts on a show as Shamrock Rovers beat Dundalk
4 On healing and wild hurling: The re-education of Diarmuid Lyng
5 Joanne O’Riordan: Mo Farah should have to face Jeremy Kyle
Real news has value SUBSCRIBE
Crossword Get access to over 6,000 interactive crosswords