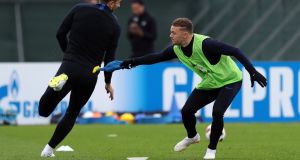 England’s back three of Kyle Walker, John Stones and Harry Maguire have earned plenty of plaudits for their performances in Russia this summer. They have started four games together and won three - Yerry Mina’s late header earning Colombia a draw in the last-16, before England held their nerve in a penalty shootout. However, Croatia present by far the sternest challenge so far to Gareth Southgate’s side - and Mario Mandzukic is the perhaps the most complete centre-forward they will have come across at the World Cup.

At 32-years-old, Mandzukic’s powers are arguably on the wane, and he has limped through the latter stages of their victories over Denmark and Russia - both of which went to penalties. But he still presents a serious challenge for England’s relatively inexperienced backline. The Juventus striker is sublime in the air, and providing his finishing is sharp can perform the role of an out and out goalscorer, particularly with Ivan Perisic offering good service from the left.

However, he has often been deployed on the left for Juve and can drift across the front three. Walker - a converted fullback playing on the right of England’s three - has looked vulnerable on occasions during the tournament, relying on his pace and power to get himself out of trouble. Mandzukic will look to exploit this potential weak link both in the air and on the deck - providing his legs hold up.

It is notoriously difficult to prise players away from Tottenham Hotspur and their chairman Daniel Levy, with a strict wage structure often making it hard for the club to bring like-for-like replacements to White Hart Lane. However, Spurs were clearly happy enough to let Kyle Walker join Manchester City for €52 million last summer in the knowledge they had an ace up their sleeve.

Kieran Trippier has only made 11 international appearances but he has been arguably England’s most impressive performer on their run to the semi-finals. Granted, at 27-years-old he is not necessarily a young gun, but his development over the last 12 months has been rapid. Trippier is vital to the way Gareth Southgate’s side play, offering genuine width from right wing back - as well as forming a key part of the defensive unit.

And it is his delivery which is particularly impressive, his ability over dead balls adding to England’s potent set-piece armoury. Perhaps the greatest compliment to pay Trippier is how Southgate has deployed Walker as a third centre-half in order to get both of them on the pitch - he will be vital to his side’s hopes of reaching the World Cup final for just the second time in their history.

By now football fever has gripped every corner of England - apart from SW19. Indeed, organisers at Wimbledon are still refusing to screen any World Cup action, despite Gareth Southgate’s side standing on the brink of just the second tournament final in the nation’s history. And even if they beat Croatia the All England Club’s stance won’t change - with the Wimbledon Men’s final due to start two hours prior to kick-off in Moscow. Supporters can, however, follow the match on their phones and tablets using Wimbledon Wi-Fi - presumably Roger Federer will be watching from his chair between sets.