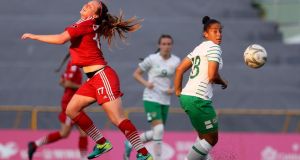 Sometimes playing a soccer match isn’t just about winning. Rianna Jarrett felt like that when she togged out against Norway following recovery from her third ACL injury. The Republic of Ireland lost the game but those 10 minutes on the pitch were worth the world to Jarrett.

Her next goal is to complete an injury-free season with Wexford Youths for the first time in more than four years and hold on to that green jersey, be part of the team.

The dreaded pop of an ACL is far from unusual for soccer players, especially women, but three times is not common. Jarrett jokes the FAI must have a good insurance policy as they keep on fixing her up and sending her back out on to the pitch.

For an outsider the mystery is not so much why her knees keep going – twice on the right and once on the left for good measure – but why the Wexford woman continues playing.

“I did struggle with the third rehab, I did question what level I would be going back to. I talked to the FAI medical team, and to be honest all I said then was I want to be able to knock about on the street and not get injured,” Jarrett says.

Her love of soccer started as a six-year-old when she joined the local boys’ team and later a girls’ team. Her twin brother Jordan is also a keen player so that helped. That long pedigree kept her going to training during rehabilitation – one ACL injury took more than 14 months to heal.

“There is a lot of craic goes on at training, if I was at home all the time I would be very isolated. I felt it would be difficult to go back after being at home. This way I still felt part of the team, part of that energy,” she says.

“There were days too when I didn’t want to even talk about soccer, but I think going to training all the time really helped.”

Jarrett keeps coming back to the pure joy she feels as a player, even when taking penalties.

“I think people forget it’s okay to feel upset first, you should feel upset and yeah, cry. You can’t get over it if you don’t do that, and then you start to feel you don’t want to train or do the exercises. You can’t pretend there is nothing there to be upset about,” she says.

The first tear was in April 2013 on duty with Ireland Under-19s in Holland.

“I heard a pop, and it was sore. The first 90 seconds were very sore. My knee buckled. I walked off the pitch and the physio was doing tests, asking me to jog and then do a one-leg hop. But I couldn’t, I couldn’t get off that leg,” she says.

Jarrett adds with a grin she’s noticed Premier League players always seem to get stretchered off with ACL injuries but women players manage to walk.

Two months later she was on the operating table, with eight months of rehab.

She rejoined Wexford Youths. Her plan was to study at the University of Tennessee at Martin on a scholarship – far from home but with Northern Ireland man Phil McNamara as coach she was well looked after.

“There is huge money in it over there, this was a small college and facilities were great. I played about 20 games in 2½ months. There’s a rule there for colleges so they can’t be seen to give more funding to men than women’s sports.”

But once again her knees intervened. Home for Christmas, she went to winter training with the FAI in Spain. Playing a friendly, she injured her right knee again.

Shaking her head, she says: “I still don’t know exactly what happened. I remember going for the shot, and then being on the ground. The second time was tough, when I found out I was very upset.”

So a second operation to reconstruct the ligament with a graft from her hamstring.

This time she was back in action by the end of October heading for the 2015 FAI Cup. And for six months, all was well.

In March 2016 she was in Cyprus against Italy. Another green jersey, her career on the mend. And it happened again. This time the left knee.

“I just remember when I got the MRI results, I just started crying for a few minutes. Then I got myself together again, and we started chatting about how to get better again,” she says.

“I stayed on with the girls, that was great – I was in a professional environment. If I’d gone home, I would have gone to the pub first thing. It was hard.”

Unable to return to America, she resumed studying at IT Carlow. The BA in sports management and coaching is a partnership with the FAI, GAA and Leinster Rugby.

And her final-year thesis? A comparison of rates of ACL injuries between male and female soccer players in America.

Research carried out by the American National Collegiate Athletic Association points to a higher rate of knee injury among sportswomen than men. Jarrett says her understanding is this is linked to women having wider hip-bone structure leading to more pressure at the knees than for men. So not a lot to do then, other than preventative stretching.

During rehab she coached under-age teams around Carlow and Kilkenny. The girls repaid her when she got back on the pitch for Wexford in June – her name chanted from the stands.

“It feels weird, people say I’m inspirational, but I feel like this is just me. I love soccer, I couldn’t be without it. We don’t get paid, there is no money in it at all but it’s such a big part of my life,” she says.

The team spirit Jarrett constantly mentions extends to the supporters too, she says. From a mixed-race background, Jarrett says she’s never experienced racism. She’s not sure why and thinks maybe it’s because the supporters feel they are part of the team.

In July the FAI opens an Under-17 national league with 11 teams. The plan is to run a short season this year, and then launch a regular season in March.

Sue Ronan, head of FAI women’s soccer, says the gap between the senior league and grassroots clubs is too big. So they’re hoping this league will bridge that.

Jarrett’s generation missed out on this but she did make the Summer Universiade games last year in Taipei. Five games later, she felt things were finally happening again.

And then in June she was ready for the senior team, facing Norway with a chance at a World Cup place.

“It was strange, I was so relieved to be playing again, wearing the green jersey. We lost, but I was happy – it was devastating that we lost, and I wasn’t sure if I could be happy. Was it all right to feel happy for myself?”

But somehow you know her team-mates understood the emotional dilemma, that’s the team spirit that kept Jarrett focused and by their side.