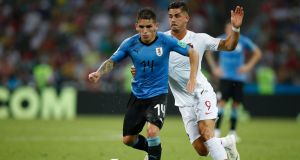 Arsenal head coach Unai Emery hailed Lucas Torreira as a “very bright talent” as he welcomed the Uruguay midfielder to the Emirates Stadium.

The 22-year-old joins from Sampdoria and has signed a five-year deal to become Arsenal’s fourth signing of the summer as the club look to move on from the reign of Arsene Wenger.

Emery, who was appointed as Wenger’s successor in May, has worked alongside head of recruitment Sven Mislintat and head of football relations Raul Sanllehi to identify and sign the players they believe can improve on last season’s sixth-place finish in the Premier League.

Defensive positions were clearly made the priority as Torreira follows in the footsteps of full-back Stephan Lichtsteiner, goalkeeper Bernd Leno and centre-back Sokratis Papastathopoulos in signing for the Gunners.

Torreira, who cost Arsenal a reported £27million, featured in all of Uruguay’s World Cup games and started the quarter-final defeat at the hands of France.

The club announced the signing on Tuesday afternoon, with Emery delighted to add Torreira to his squad.

“In Lucas Torreira, we have signed a young player who is a very bright talent in the game,” he told Arsenal’s official website.

“A midfielder with great quality, I have enjoyed watching his performances for Sampdoria in the past two seasons, and we all saw him do very well for Uruguay in the World Cup.

“He is a young player already with good experience, but who wants to keep on growing. We welcome Lucas to Arsenal and look forward to him joining us soon for pre-season.”

Torreira said he is excited to get started in London, with the club confirming he will wear the number 11 shirt for Arsenal in the forthcoming season.

“I feel very happy,” he said. “I want to make the most of this opportunity life has given me. I am really looking forward to starting this new adventure.

“I feel calm. I am used to coping with this kind of thing in the best possible way. It’s a very positive thing that people want to welcome me.

“It makes me feel comfortable. Now I am calm and I look forward to the future, which for sure will be very nice.”

With midfielders Jack Wilshere and Santi Cazorla released at the end of their contracts, Torreira’s addition will be seen as key for Emery to bolster his numbers in the middle of the park.

As well as bringing in a quartet of new signings, Arsenal also extended the contracts of Calum Chambers, Ainsley Maitland-Niles and Granit Xhaka in recent weeks, while Mohamed Elneny has also agreed to fresh terms since Wenger stepped aside at the end of last season.

Press Association Sport understands that Arsenal are also close to completing a deal to land France Under-20 international Matteo Guendouzi.

The 19-year-old Lorient midfielder was expected to undergo his medical on Monday and his arrival could be announced later in the week.

Emery will take charge of his first game since replacing Wenger when he takes an Arsenal XI to play Boreham Wood in a pre-season friendly on Saturday.

1 Tipping Point: Eddie Jones’s rhetoric is out of place in a febrile political climate
2 Maguire and Martial head Manchester United past Chelsea
3 Eddie Jones continues to revel in putting rugby’s nose out of joint
4 Rory McIlroy heads for Mexico with ‘WGC slam’ in sight
5 Andy Farrell recalls 13 players to Ireland squad ahead of England clash
Real news has value SUBSCRIBE