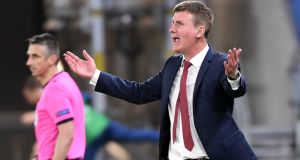 Stephen Kenny’s Ireland team will look to recover from Thursday’s playoff defeat with a positive result against Wales. Photograph: PA

The visit of Wales this weekend will give Stephen Kenny and his players an early opportunity to put the disappointment of Thursday night’s penalty defeat behind them but another game played in an empty stadium will complete a bad week for his employers with elimination from Euro2020 having cost the FAI an estimated minimum of €5 million.

The association stood to gross almost twice that for just participating in an event that will include four games in Dublin, after which there was the potential for bonuses linked to group stage points won and progression to the knock out rounds, as well as additional sponsorship revenues. But after deductions for expenses and the players’ pool it had been expected that the €5 million figure was the least the association would have retained.

Interim chief executive Gary Owens insists the figure was never budgeted for but accepts the association would have been very happy to have it. As it is, government funding is the more immediate issue to the FAI’s finances with the organisation having applied for €19.3 million in coronavirus related supports, €4.9 million of which would be earmarked for clubs at all levels around the country.

“That would bring us back to where we thought would be when we signed off on the business plan with Bank of Ireland in March,” he says. “We haven’t had any word on the application so far, we could hear over the next couple of weeks but I’d be hopeful that we get the money in October or November. We certainly need it.”

More will be required, he suggests, if crowds aren’t allowed back into games next year. “In common with the IRFU, the revenue generated around our senior games is very important to us and we have a lot of World Cup matches scheduled for 2021. Again, I’d be hopeful that progress will be made, we are part of a joint committee chaired by Martin Murphy of the Aviva stadium, that is doing really good work and Uefa is also working hard on this as they need to find solutions ahead of the European Championships.

“There will be technological advances that will aid us,” he continues, “but if we don’t make fairly substantial progress then it becomes challenging for us. The trial run at the Super Cup, where they had 20,000 spectators went very well and the biggest issue, I think, was around how to stop people mixing socially outside the ground after the game, but that was around a third of the stadium’s normal capacity and we think something similar should be achievable in the Aviva so that would be around 18,000.

“I don’t think there’s much point in pushing it for this year but for the start of the World Cup campaign, yes, certainly we would be hoping for that.”

The association is more aware than ever of the challenges Covid-19 poses after a week in which two of its staff members tested positive. One of which only stepped in to replace the other on the trip to Slovakia on Tuesday, having tested negative the previous day. When he then tested positive himself on Wednesday, the players who had been sitting immediately behind him on the plane - Aaron Connolly and Adam Idah - and two other association staff members who were sitting directly in front of him, were deemed to be close contacts and excluded from any involvement in the game.

Having been unable to travel out with the squad immediately after it, the two players returned to their clubs early on Friday afternoon and the association organised a private plane to fly its three staff home in the evening.

Daryl Horgan and Sean Maguire were called up by Stephen Kenny to replace the players who will miss both of the Nations League games over the next five days against Wales and then Finland away.

“It’s been difficult,” says Owens, who declines to get into what mistakes might have been made over the course of the few days, “but we are happy to be getting the staff home, we were worried about them potentially being stuck there for two weeks and when you added up what was involved in terms of keeping them there, there wasn’t much of a difference in getting them out.”

“What happened, though, has highlighted the scale of the challenge involved in all of this; the fact that a negative test is actually a test for three or four days earlier, it seems. We all tested negative on Monday but any one of us might have tested positive out there and while keeping people distanced in hotels is easy, on planes and buses it’s a lot harder . . . and the seats on the plane we used were a lot more spaced out than on a commercial flight.

“What I would say, though, is that we obeyed all of the protocols that we had agreed with the HSE, we stuck to the letter of them; we had to because there is a bigger issue here and because we need to be allowed to travel without the normal restrictions. We felt that because the distance between the people on the plane was 1.7 metres and everyone was wearing masks and there was air sanitation, they might have made an exception when we went to them to explain what happened but they didn’t and we accepted that; we didn’t want to do anything to jeopardise the agreement.”

The ongoing impact of the virus on the international game was felt again on Friday when the Irish under-21s flew to Pisa for a critically important European Championship qualifier on Tuesday even as it emerged that the Italians were in quarantine in Iceland where their game was postponed after two players and a staff member had tested positive.

“We’ve seen Scotland and Slovakia have problems too,” says Owens. “I was only asking our team doctor, Alan Byrne, if all of this is sustainable. I’m not sure what the answer is but we have to keep working to try to ensure that it is.”