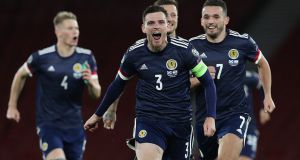 Andy Robertson celebrates after Scotland’s victory over Israel in a penalty shoot-out in the semi-finals of the Uefa Euro 2020 playoffs. Photograph: Ian MacNicol/Getty Images

Scotland had not been involved in extra time since 1961. They have not competed in a major tournament since 1998. On an evening where the first of those runs was broken, the second came to within a game of potentially ending.

A penalty shoot-out success over Israel took Steve Clarke’s team to the Nations League playoff final. The Scots slotted home all five of their spot kicks, with Kenny McLean the man to seal victory. David Marshall’s earlier save from Eran Zahavi was equally significant.

In a match which soon regressed into an ugly scrap, the Israel substitute Shon Weissman was inches away from snatching glory with four minutes to play. In the final act of extra time, Scotland’s Liam Cooper hit the post with a header.

Had there been a breakthrough, neither team could have claimed they deserved it. Serbia, who defeated Norway, will not be fretting about the prospects of Scotland’s visit with a European Championship place at stake. Not that Clarke had immediate cause to care about the standards displayed in this fixture.

“You have to enjoy it,” said Scotland’s manager. “It’s another step towards hopefully making a bit of history for the country. Qualification is still in our hands. We are developing, I think there is something building here. They put everything into that game and were rewarded. It was exactly the type of game I expected; tense, nervy, very few shots on target.”

Debate surrounding the significance of this fixture in appropriate historical context for Scotland had been punctured by Covid-19 troubles. Stuart Armstrong’s positive test plus the additional impact on Ryan Christie and Kieran Tierney – all three had to be withdrawn from this tie – delivered an element of hassle Clarke could well have done without.

Somewhat surprisingly, Scotland’s manager retained the back three that was not entirely convincing during the September international window; Scott McTominay partnered Cooper and Declan Gallagher. Clarke deployed Oli McBurnie alongside Lyndon Dykes for the first time in attack.

Fine play by Dykes, who knocked down a Callum McGregor cross, contributed to a fine Scotland chance in the eighth minute. When composure was required, John McGinn instead blazed wildly over Ofir Marciano’s goal. When Andy Robertson curled a free-kick narrowly wide four minutes later, the hosts had cause for optimism.

Yet Israel were perfectly comfortable during the opening period. Only a crucial McGregor intervention prevented Hatem Elhamed from sending the visitors in front. Scotland had started to wobble before a glaring opportunity fell McTominay’s way from a Robertson corner. In blissful isolation, the Manchester United player’s header somehow missed the target. The shocked demeanour of Clarke – not typically one for demonstrative behaviour – said it all.

If cliche would state Scotland suffered from the absence of a noisy support, at least there was nobody in the Hampden stands to transmit nervousness to the players. Years in the international wilderness have not really blunted the widespread notion that Scotland should see off opposition such as Israel. Evidence, as provided here, showed there is little between the sides.

A scrappy start to the second half was improved by a curling shot from Eyal Golasa which only narrowly missed the goal frame. Neither team was doing much to suggest they could make a meaningful contribution to the rescheduled Euro finals. Scotland howled in vain for a penalty after the ball flicked off the arm of Eitan Tibi. That the shouts came after a shanked Elhamed clearance rather summed up the standard of proceedings. The high stakes, of course, were a mitigating factor. Semi-finals are rarely memorable.

With an hour played, Clarke faced a dilemma. Israel’s recent history of giving Scotland difficulty did not bode well. Neither, indeed, did the failure to present McBurnie and Dykes with chances to break the deadlock. The manager had to decide whether to stick or twist.

As Clarke pondered, the excellent Manor Solomon raised Scottish pulses. The Shakhtar Donetsk player swung in a delightful 71st-minute free-kick that somehow managed to evade all interested parties. Israel’s confidence was further endorsed by Zahavi, who fired a long-range effort into the hands of Marshall.

From the latest in a long series of Robertson set plays, Gallagher headed just wide. Elhamed came even closer, with a fierce shot McTominay had to deflect wide for a corner. As Weissman and Gallagher had their own close calls, a first ever penalty shootout for Scotland beckoned. Their record in that, at least, now stands at 100 per cent. Onwards to Belgrade. – Guardian