Both clubs enter Manchester derby with concerns but one deals in trust, the other in hope 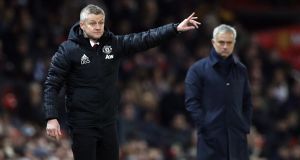 There are many recent comparisons and differences between the two clubs as they meet in another Manchester derby – investment, strategy, trophies, players – and they come together symbolically in the attitudes within each club towards the respective manager.

It is a sobering situation for United to acknowledge, but the Premier League table informs us all weekly that this is the case. If City are agitated at the sight of themselves 11 points behind Liverpool, what do United think when they are a further 11 behind? Keep hoping a corner has been turned, or soon will be?

Liverpool – and Leicester City – have such momentum and strategic strength, even Guardiola may occasionally fret about what can be done this season in the league. But City’s vast wealth and the talent of their manager and squad protects them from serious angst.

Over at Old Trafford, however, while there is financial muscle, a longer-term drift into mediocrity would affect it. That in turn would hinder the speed of revival. This is a real danger.

The plague on thought of short-termism meant that on Thursday morning, many among the United family awoke relaxed, contented by the previous evening’s 2-1 victory over Tottenham. The rush to coo over three points gained against Solskjaer’s predecessor José Mourinho left the previous two Premier League games an afterthought.

This thinking needs to change. Prior to kick-off on Wednesday, those two matches – against Aston Villa and Sheffield United – were the context for the Spurs visit. It wasn’t all about Mourinho, it was about where United were, which was mid-table.

Solskjaer addressed the state of things in the second paragraph of his programme notes. It began: “The team is learning on the job . . .”

The rest of the sentence was banal, citing “new experiences and lessons”, such as being 2-1 ahead against Villa and drawing 2-2, or being 3-2 ahead at Bramall Lane seven days before that and drawing 3-3.

When, with more than 40 minutes left, United went 2-1 up against Spurs, there was a chance to test Solskjaer’s opinion that his squad is learning on the job and had they drawn 2-2, there would have been criticism. So United holding on to their lead and taking three points rather than one needs to be recognised and applauded.

If Solskjaer was guilty of anything, it was honesty. Learning on the job can be a loaded phrase in elite level football. But he has been in this job in a permanent capacity only since late March; it is not even a year since he replaced Mourinho temporarily.

Alex Ferguson, even though there were bad days that lasted months, was given trust. He offered more than hope, there was belief.

Taken together with Mourinho at United, late 1980s Ferguson offers a contrast for Solskjaer. Ferguson was given time when he was struggling to haul United back to where he thought they should be because, somewhere deep down, the hierarchy believed in what he had achieved at Aberdeen.

Mourinho at Old Trafford was given less time, despite winning the League Cup and Europa League in his first season. Recruitment and relationships were factors in Mourinho’s departure and they all added up to a loss of belief in him.

Time – as in patience – has to be founded in belief and it is quite something for Mourinho to consider: those running United looked at him as last November became December, gazed into the future and decided to part ways. For a serial winner, that is a significant lack of faith.

But removing one manager does not mean an immediate transfusion of belief into another and Solskjaer’s status as a legend is a potential complication for the club as well as the asset he proved as caretaker.

United seem determined to support Solskjaer long-term. Again, this is admirable in principle, but the paradox is that he has to earn this faith weekly

As a player, Solskjaer was a straight forward to assess, but as a manager he, or his CV, is not straightforward. Solskjaer has no comparable back catalogue to peruse and return to when results go awry. His Premier League managerial experience was short and unsuccessful at Cardiff City and there is an issue of relevance to his time at Molde or before that as a coach with United’s reserves.

So you go back to him learning on the job. On Thursday, Solskjaer’s honesty seemed admirable, as opposed to naive. Victory shielded him, but this was only United’s fifth win in 15 Premier League games. They need to be better.

The positive on Wednesday was that they were and United have shown resilience when playing their alleged peers in the so-called “big six”. They have not played any of them away in the league this season, though, and while this is not the City of last season, they are a collective, not a collection.

United have also shown a capacity to trip up in the games when they are expected to win – Villa, Sheffield. The game after Man City is Everton at home.

As a club, United seem determined to support Solskjaer long-term. Again, this is admirable in principle, but the paradox is that he has to earn this faith weekly. Had Spurs equalised, the atmosphere pre-City would be different.

Solskjaer does not have the body of work of a Ferguson or Guardiola. They merited trust because they brought hope, whereas with Solskjaer, United hope he justifies their trust. The former is a strategy, the latter is a gamble.

In among the many glowing tributes to Clive James last Saturday morning was one that touched on James’s definition of humour.

“Common sense, dancing,” he called it.

It’s a lovely description and the words were still in the brain as Kevin De Bruyne took to the field at Newcastle where he once again scored a goal of balletic balance, precision and power and generally played on his toes with beguiling grace.

De Bruyne really is some player and while he may not be common sense, dancing, even the way he runs and shimmies makes you smile. That’s before we get to the sweep and verve of his passing. It might not be comic humour, but it is clever.

Hugh McIlvanney once said that sometimes the only reaction to Jimmy Johnstone was to laugh, so outrageously gifted was he. McIlvanney said the same about Charlie Tully.