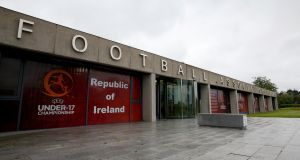 The FAI has been invited to appear before the Joint Oireachtas Committee for Sport. Photograph: Inpho

Joint Oireachtas Committee for Sport member Catherine Murphy has acknowledged that the FAI’s work might merit substantially more public funding over the long term but says that the organisation is not in a fit state to receive extra government money now.

Speaking on RTÉ Radio’s Morning Ireland on Tuesday - after an unsuccessful attempt by members of the association’s board to persuade Minister for Sport Shane Ross to give it “more than €10 million” - the Social Democrat politician was asked whether there was a case for significantly increasing the €2.7 million in annual public funding it currently receives given its popularity and the fact that greyhound racing receives more than five times that sum.

“It’s the most played sport,” said Murphy, “and we want to see the sporting body that runs that sport actually capable of delivering the plans including the social programmes that are run and that might be something that needs to be looked at.

“I don’t think that an organisation that is being inquired into by the Gardaí and by the ODCE is in that place at this time. Which is not to say that the FAI cannot get there but we need to understand what other mechanisms are there to look at this issue from the point of view of solvency but also how this organisation can be made into an organisation that we can have confidence in.”

The FAI has been invited to appear before the Committee on Wednesday but “as of close of business yesterday,” Murphy said, they had not indicated whether they will be attending. Speaking outside the Dail after the meeting with Minister Ross on Monday night, the association’s executive lead, Paul Cooke, had not sounded like they would.

Murphy also lamented the fact that any attempt by the Committee to establish just how it is that the association came to be in such a perilous financial position was likely to be hampered by the unavailability of members of the organisation’s previous board. “That,” she said, “is an issue”.

Murphy said that until she and the other Committee members hear from the various parties (Ross and Sport Ireland are due to appear on Wednesday morning) she is unsure just how the crisis at the association is going to be resolved.

“You’d have to know what the FAI’s own plans are,” she said. “Obviously they are talking to their own bankers but not only Uefa but Fifa may have a role in a resolution if there is to be a resolution. We have to remember that there is 200 employees here as well.

“I don’t know what the resolution is and we are considering the issue blind in the absence of speaking to the FAI and we have to consider that the recovery plan will have to consider the totality of the debts and that will be well above the €55 million that was talked about; it could be closer to €80 million, so the new chairperson and the new directors need to take ownership of that recovery plan.”

After his meeting with the delegation of six directors of the association on Monday evening, Ross had been completely dismissive of the idea that the government might provide what he described as a government “bailout” despite the association being in “a very grave and dark place”.

“I think we disappointed them because we are not going to bail them out but I think we have agreed among ourselves afterwards on our proposal; we are going to seek a meeting with Uefa because they are also an interested party and see if we can find a solution which obviously doesn’t include a bailout by the Irish government.”

The association had been, he said seeking “very large sums of money, absolutely unthinkable amounts, over €10 million, which there is no way the government could even think of giving to them. There have been serious recommendations made to us (in the Kosi report) not to fund the FAI at present and we couldn’t possibly do it.

“There will, he added however, “be considerable support but I am not talking about financial support” for a “wonderful sport which does so much social good”.

1 Born to ride, born to win: Sam Bennett, the making of a green machine
2 Tottenham offer out of favour Dele Alli to PSG
3 Next stop the Champs-Elysées in green for Sam Bennett
4 Ulster’s European dream clinically crushed by Toulouse
5 Keith Duggan: Surreal story of John Delaney needs to act as a wake-up call for FAI
Real news has value SUBSCRIBE
Crossword Get access to over 6,000 interactive crosswords