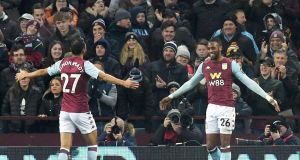 On a night when Liverpool’s next generation hoped to show their readiness for regular action at this level, Aston Villa’s 30-year-old striker Jonathan Kodjia seized his own chance to reassert a similar claim by scoring a first-half hat-trick on his first start of the season. That haul by the Ivory Coast international, along with an own goal by Morgan Boyes, earned a place in the Carabao Cup semi-final for the hosts and taught Liverpool’s youngsters a lesson about the merciless reality of senior football. Wesley emphasised the point by making it 5-0 in stoppage time.

The scoreline made this seem like a caning but Liverpool were not quite outclassed so much as defused with mature efficiency and some rotten luck. Rarely in the club’s modern history could a Liverpool team be described as an unknown quantity but here their lineup contained several players who might have been asked for ID at the entrance, not so much to check their ages as to establish who exactly they were. Their ages, having said that, were also remarkable as this was the club’s youngest ever starting lineup, with a few of the players barely old enough to buy a scratch card let alone to compete as equals against Premier League opponents. Or so Aston Villa hoped.

But the visitors were no raffle-winners: they were some of the most coveted emerging talents on the planet and this was a chance for them to turbo-charge their careers, especially as Liverpool had dangled the possibility of players who performed particularly well here being flown straight out to join the first team in Qatar.

As for Villa, this tie could practically have been billed as a damage limitation exercise for Dean Smith’s men in two respects: firstly, they needed to avoid suffering any significant injuries before a critical run of fixtures in the Premier League – they play each of the three teams below them in the table before the turn of the year – and secondly, they had to save face by not struggling against a band of rookies. Granted, Smith made 10 alterations to the side that began Saturday’s league defeat at Sheffield United but their team still consisted almost entirely of senior internationals.

Liverpool, by contrast, started with a 16-year-old, three 17-year-olds and two 18-year-olds, all led by the relatively gnarled midfielder Pedro Chirivella, age 22 and a veteran of precisely half a Premier League match.

The youths certainly were not bashful. They may be unfamiliar to the general public but they are used to playing with each other and their cohesion showed. From the zippy way the visitors started it was clear that Villa were going to have their agility tested, especially their captain and centre-back, James Chester, who made his return to action here after 11 months out with injury. At least he had an excuse for looking sluggish, unlike his teammates, as disjointed Villa were given the run-around for the first 10 minutes.

A slack pass by goalkeeper Orjan Nyland led to Liverpool’s first chance, with Herbie Kane blasting wide from the corner of the box. Then the Villa keeper had to make an excellent one-handed save to turn away a shot by Harvey Elliott. Two minutes later Nyland had to rescue his team again, this time denying Kane from close range after a clever chipped pass by Isaac Christie-Davies.

But top-level football is a harsh place and soon Liverpool’s novices were shown how unforgiving it can be. First, Villa opened the scoring. Conor Hourihane curled in a free-kick from the right, with his compatriot Caoimhín Kelleher in the Liverpool goal, seemingly distracted by the slightest of touches from Kodjia. Kelleher’s luck worsened three minutes later, when a cross from the right by Ahmed Elmohamady took a huge deflection off Boyes and looped over the goalkeeper and into the net.

Liverpool enjoyed no such fortune when Ki-Jana Hoever’s shot from the edge of the area took a nick off a defender and flew wide. By now Villa were engaged in wily game-management but the upstarts in white continued trying to perturb them. Elliott was a delightful pest with his wriggly dribbles and cute touches. In the 26th minute he scooted down the right before dinking a lovely pass between two defenders to Christie-Davies, who met it on the volley 10 yards out. Nyland reacted well to bat away the shot.

Villa secured the match in the 37th minute when Jota pounced on a hefty touch by Sepp van den Berg and slipped a pass through to Kodjia. The Ivory Coast international finished without fuss, which will do no harm to his cause of trying to take the place of Wesley in Villa’s regular starting XI.

He gave that prospect an even bigger boost just before the break, when he flicked the ball into the net from six yards after neat work by Jota and Elmohamady.

Villa saw no need to over-exert themselves after the break but Liverpool’s players yearned for at least a goal to show for their effort. Kane almost got one in the 55th minute but Nyland denied him with a superb reflex save. Then Kelleher had some joy at the other end, tipping away a low shot by Kodjia. Kelleher later stopped Mohamed Trezeguet and Henri Lansbury from increasing the scoring. But he could not prevent Wesley from finding the bottom corner of the net with a cool finish in stoppage time. – Guardian