MLS must eradicate the cancer of neo-Nazi hooliganism 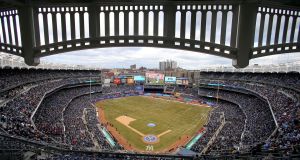 New York City FC were less than a month into their inaugural season in Major League Soccer (MLS) back in 2015 when stories emerged of a racist fringe to their supporters. A small group of Hispanic males wearing gang symbols turned up to one of the first home games at Yankee Stadium and began chanting racial insults and spewing neo-Nazi hate. The incident was reported on in some detail by a local soccer website and it seemed a rather bizarre and depressing start to life for a neophyte club owned by Arab billionaires and situated in the most diverse city in America.

Far more troubling than that initial episode is the fact that, four years later, the presence of this tiny minority of far-right extremists continues to be an issue for the Bronx outfit. A lengthy investigation in The Huffington Post earlier this month offered a forensic insight into the links between a section of their hardcore supporters and white nationalist groups like the Proud Boys and the 211 Boot Boys (these knuckleheads do struggle with original names). It included images of the “Empire State Ultras” posing for photos with a banner containing the Totenkopf, the skull and crossbones symbol associated with the units of the SS that ran the concentration camps for Hitler.

If that made for disturbing reading, more disconcerting by far was the tepid response of Don Garber, commissioner of the MLS. Having offered no official response to the story of soccer fans passing around “White Power” stickers, the man who runs the league only finally addressed the matter when confronted by the Philadelphia Inquirer’s Jonathan Tannenwald.

Even in a dystopia that long ago went through the looking glass on racial matters, the failure of a club and a league to be more outspoken is truly odd

“The issue that I read about in the Huffington Post is not behaviour that’s taking place in our stadiums,” said Garber. “It’s the view that some fans have about other fans. And our job is not to judge and profile any fan. It’s to manage how our fans are interacting with each other, and how they’re behaving at our stadiums. So, at this point, that’s how we’re going to address the situation. The last thing this league is going to do is start getting into profiling who people are and what their backgrounds are. That is a slippery slope that is not something we’re going to engage in.”

Garber was technically correct, if morally all over the place. Aside from menacing fellow supporters in the stands, and, eh, the odd bout of racist chanting, the white supremacists have not been violent during games. However, several of the most prominent NYC fans are veterans of the 2017 “Unite The Right” march in Charlottesville and some were present when the Proud Boys attacked a group of left-wing protesters on the streets of Manhattan last year. One of those involved in the New York violence, Irv Antillon, somebody also affiliated with the Latino skinhead gang “Batallion 49”, was subsequently banned from Yankee Stadium.

In terms of marketing and impact, New York City FC have been an MLS success story. They currently average attendances of around 23,000 and the number of neo-Nazis in their support base is relatively tiny. The question is why the club and the league have taken so long to start trying to eradicate this cancer in their midst. Barring Antillon was a welcome, if belated, step. Concerned fans have spent years trying to persuade those in charge, often in private, more times on social media, that something needed to be done about him and his toxic fellow travellers, individuals who turn up for matches wearing Totenkopf hats.

Worse again, when people eventually tried to take matters into their own hands in Yankee Stadium, unfurling anti-fascist banners to make a statement, security prevented them from doing so. Even in a dystopia that long ago went through the looking glass on racial matters, this tormented country where the president regularly dog-whistles the white nationalist demographic, the failure of a club and a league to be more proactive, outspoken and dynamic on this is truly odd. Especially because some with influence in the game are also fine with the status quo.

“I think @thesoccerdon (Don Garber) correctly recognised and stated that policing thought of fans in an MLS stadium (however repugnant said thought may be to someone) is not something that the league will or should do,” tweeted Alexi Lalas, former American international turned pundit.

Soccer in America and the white supremacist movement would seem to be strange bedfellows. Aside from the fact half the players in MLS are foreigners, the burgeoning popularity of the sport usually bothers the MAGA nativists. Every now and again, the denizens of right-wing talk radio will get into a real tizzy about it (especially if the US performs decently at the World Cup), regarding the growth as further evidence of a creepy and insidious globalisation.

Then again, the people involved in this sordid netherworld appear to be operating off a template from a different country and a different time. Their devotion to the skinhead subculture, the bootboy look, even the Oi! bands that many of them also follow, the whole thing reeks of England in the last century. As does the casual racism, of course. Little wonder then that when some white supremacist fans got into a street brawl with New York Red Bulls fans a while back, they could be heard chanting, “Who are ya?” in affected English accents.

We know exactly who and what they are.