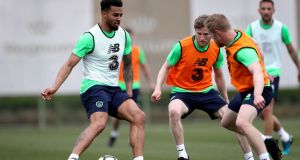 Republic of Ireland international Cyrus Christie says he has spoken to gardaí about racist abuse after several of Ireland’s qualification games during the recent World Cup campaign. But the 25-year-old is sceptical about how much can, or will, be done to address the issue.

Team-mate James McClean spoke after the playoff defeat by Denmark of Christie being upset by a small number of messages directed at him after that game. And while Christie suggests some of the detail in his team-mate’s version of events was incorrect, he says he was targeted several times on social media over the course of the campaign, including after the games against Georgia and Serbia.

Ultimately, he says, he has learned to live with a problem that was prevalent when he was a schoolboy growing up and playing for his local club in Coventry.

“That’s just the way it is,” he says. “A lot of the time when stuff like this happens, nothing really gets done. A lot of these people are hiding behind different profiles. I’ve had a lot worse growing up, when I was in school, so for me it was water off a duck’s back. I’ve moved on, I was more disappointed with the result than anything. If that’s what they want to resort to, they can; it’s ‘sticks and stones’ at the end of the day. I’m not going to be too hurt by it.”

Part of the problem, he feels, is the reaction of the authorities when cases do come to light or allegations are made. Liverpool striker Roberto Firmino was cleared earlier in the season of racially abusing Everton’s Martin Holgate but the social media history of the accuser was subsequently trawled through and he ended up facing a disciplinary charge for tweets posted during his mid-teens.

“They go through his tweets from the age of 13 and 14 and they bring it up and he gets disciplined quicker,” says Christie. “They set a precedent there. And I think that’s why a lot of people don’t speak about it. I think that if you spoke to a lot of the black lads who have played, they have come across it. They have had racial comments come their way. But not a lot has been done about it and you feel that it’s almost normal.

“I have experienced it a lot and it is kind of normal for me,” he continues. “You kind of think that it’s going away but then it comes back. I’m not sure how long it will take to be eradicated from the game but, as I’ve said, a lot more needs to be done.”

Christie says that the suggestion he was crying in the dressing room after the Denmark game is untrue and that he actually only became aware of the abuse in question a few days later. But he insists none of it has in any way diminished his enthusiasm for playing for Ireland.

“I can’t hold the whole country to certain people’s beliefs. You cannot judge everyone by that same cover. I’ve had worse in my time, I’ve had 10 times worse. It’s just one of those, that it still happens in this day and age. But I’ll move on from it. It’s gone now, it’s in the past.”

Pádraig Harrington says Ryder Cup must go ahead in September 14:43
Allaho could be Ryanair bound after assured win at Thurles 14:13
Tadhg Furlong could be fit for Ireland’s Six Nations opener against Wales 13:18
Arsenal sign Real Madrid’s Martin Odegaard on loan 12:12
Sergio Garcia has his eyes set on September’s Ryder Cup 12:05