‘I went away, worked hard, played games, got myself properly fit’ 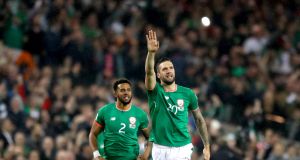 Shane Duffy: “When I won the award the other night, I sort of looked back on the two years and how far I’ve come. It’s been crazy.” Photograph: James Crombie/Inpho

Shane Duffy says he takes the Player of the Year award he won on Sunday night as independent evidence of the progress he has made in the short space of time that has passed since he began to really establish himself at senior level with the Republic of Ireland.

The 26-year-old won his first cap in the summer of 2014, against Costa Rica, but he failed to make the required impression and it was only after Ireland’s qualifying campaign for the European Championships in France that he started to get more of look in.

He was, he admits, concerned at the time that the Costa Rica friendly might be the one opportunity to stake a claim but he went away and set about improving himself as a player, something that paid off when Martin O’Neill gave him game time in the warm-ups against Switzerland and Holland before handing him a competitive debut against Italy in Ireland’s critically important third group game in France.

“The manager was first one to say there was a difference in me,” he explained of his return after an absence of more than a year. “I went away, worked hard, played games, got myself properly fit. Dedicated myself and feel I’m benefiting from it.

“When I won the award the other night, I sort of looked back on the two years and how far I’ve come. It’s been crazy. It’s sometimes hard to remember everything that happened; the Euros, the Denmark disappointment, getting promoted to the Premier League, playing in it. It’s all happened so quickly. I sat back the other night when I won the award and thought: ‘it’s been great couple of years’.”

Getting promoted with Brighton has, he says, been central to his development. “I feel it has brought me on against better players. It’s a different level to Championship, although I still think game-by-game. At the end of the season I’ll know how far I’ve come along; I’ll look back too and see how I can improve.

“It’s a tough league but I’m happy with my performances. It’s been enjoyable but tough at times, we’ve had tough periods and good ones. The manager (Chris Hughton) is great, though, he keeps everyone on their toes. He never lets us get ahead of ourselves or gets too down when we lose.”

The one disappointment, he says, is that he has not scored for the club this campaign, something he is still hoping to change. “I do feel I should be scoring more goals; that I need to add it to my game. In the Demark game I felt the goal I got might be crucial, but it wasn’t to be. I’m happy I’ve got a couple of goals for Ireland. But I’m looking to improve on that.”