Championship round-up: Michael O’Neill gets off to flyer with Stoke 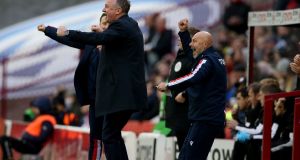 New Stoke boss Michael O’Neill had an instant impact as his side hammered Barnsley 4-2 at Oakwell in the bottom-of-the-table Championship clash.

The Northern Irishman was named as Nathan Jones’s successor on Friday and he was off to a fine start courtesy of Sam Clucas’s early goal and Lee Gregory’s penalty on the half hour.

Cameron McGeehan gave the Tykes hope in the 47th minute, but further goals from Joe Allen and Clucas left them without a win since the opening day of the season, with Patrick Schmidt grabbing a late consolation.

The win ended a three-match losing streak for the Potters, who moved off the bottom at the expense of Barnsley and to within three points of safety.

Jake Livermore’s 28th-minute goal preserved West Brom’s position at the top with a 1-0 victory over Hull.

Jayden Stockley and Ireland midfielder Alan Browne scored in the first half before another Paul Gallagher penalty sealed the points, with Juninho Bacuna netting a consolation for Town.

The striker netted from the penalty spot in the 30th minute, his first goal for 11 games, and then set up Jack Harrison for a second.

Ben Wilmot scored at the death to deny Sheffield Wednesday boss Garry Monk a win over his former side Swansea at Hillsborough.

Late goals from Fernando Forestieri and Morgan Fox had looked to have given the Owls a dramatic victory, having gone behind to Andre Ayew, but Wilmot salvaged a 2-2 draw.

Lewis Grabban gave Nottingham Forest local bagging rights, scoring his seventh goal of the season in a 1-0 win over poor travellers Derby at the City Ground.

Aleksandar Mitrovic’s 12th goal of the season ensured Fulham beat Birmingham 1-0 and move into sixth, but the striker will be banned for next week’s clash with QPR after collecting a fifth yellow card.

The striker headed Boro in front but after Nahki Wells’s ninth effort of the season and Jonny Howson’s own goal, he was forced to salvage a point which left Boro without a win in nine.

After Shaun Hutchinson’s sixth-minute effort was cancelled out by Jonathan Leko, Smith struck at the death.

Reading made it four games unbeaten under new boss Mark Bowen after goals from Michael Morrison, Ovie Ejaria and Garath McCleary gave them a 3-0 triumph over Luton, who slipped to just one point above the bottom three.

Wigan are only two points off the relegation zone after goals from Bryan Mbeumo, Kamohelo Mokotjo and Josh Dasilva gave playoff chasing Brentford a 3-0 victory. Latics defender Cedric Kipre and Brentford’s Julian Jeanvier were sent off.