Bulgaria 1 Ireland 1: How the Irish players rated in Sofia 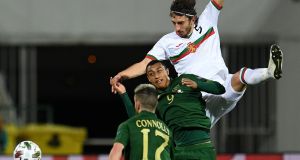 Darren Randolph: Decent save from 50th-minute free-kick and sprinted out of goal to deny two early Bulgarian chances, even using his head to calm the nerves of team-mates, before coolly feeding possession to Doherty. Tiki Taka stuff. Rating: 7

Matt Doherty: After dislodging Séamus Coleman, he needed to show something special up and down the wing. Threatened a plenty but the right back debate rages on. Rating: 6

John Egan: Began to force the pace after Ireland went 1-0 down. Two Sheffield United men in the back four can only benefit the flow of the team and he was confident picking a pass under pressure. Rating: 6

Shane Duffy (capt): Lost Bozhidar Kraev for a very avoidable goal but the Derry giant more than atoned with his 93rd-minute equaliser to ensure the Stephen Kenny era avoids a losing start. His brilliant header glosses over some poor distribution from the back. Rating: 7

Enda Stevens: Competent in defensive duties, highlighting the obvious value of a Premier League left full being employed by Ireland, with his overlapping drives creating chances that others wasted. Rating: 6

Jeff Hendrick: Natural-born footballer, who can only thrive under Kenny’s patient passing game, but as a senior figure in the squad now he needs to dominate this calibre of international opposition. Slick without ever controlling the pace. Rating: 6

James McCarthy: Welcome return and while typically neat and tidy in the middle, Ireland need him to run the entire show. He didn’t do this and made way for Robbie Brady as Hourihane slipped into the conductor’s chair. Rating: 6

Conor Hourihane: Uncomfortable at times in the midfield three but his left foot remains crucial at free kicks, corners and crosses even if his accuracy was below usual standards. Missed the target with an early opportunity. Rating: 6

Callum O’Dowda: Miscued a great chance before half-time and ran the Bulgarians around in circles without delivering an end product. Constant threat with ball at his toe and there were glimpses of the relationship with Doherty yielding some special moments down the road. Rating: 6

Adam Idah: Memorable night for the teenager despite early struggles in the physical battles with Zanev and Dimitrov but that’s as much about team-mates not playing off him in the 4-3-3 system. Worked his heart out until Shane Long’s arrival. Many more caps (and goals) ahead. Rating: 7

Aaron Connolly: Dangerous when cutting in from the left but should have scored twice. Idah gave him a clean look at goal on 51 minutes but shot poorly and after pick-pocketing a sloppy Bulgarian kick out, and nut-megging Popov, he curled his shot wide from a tight angle. Rating: 6

Subs: Robbie Brady – the epitome of a super sub – came into the fray and whipped a quality corner onto Duffy’s head to make it 1-1. Shane Long also made his presence felt. Rating: 7

Stephen Kenny: The way he wants Ireland to play is hugely encouraging, but now it becomes about selecting the correct personnel. His time as manager will live and die upon the three-man midfield he chooses. Rating: 7