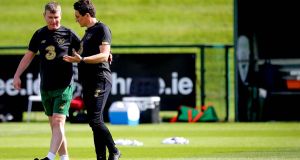 Even in this strangest of years, the timing of this week’s international break seems . . . strange.

Uefa have managed to shoehorn international fixtures into the 20-day window between the Champions League ending on August 23rd and the start of the new Premier League and La Liga seasons on September 12th.

But while this week’s Nations League fixtures might be an inconvenience for much of Europe, it’s a bit different for the Republic of Ireland.

It feels like a different world when Stephen Kenny officially took over from Mick McCarthy on April 4th - back when lockdown was in its infancy, when people were watching Tiger King on Netflix and doing three quizzes a week on Zoom.

These fixtures hold real importance for Ireland. Not only is it the start of a new era, but these games could have a major impact on qualification for both next year’s delayed European Championships and the 2022 World Cup.

Here is everything you need to know before Ireland return to action, for the first time since a 1-1 draw with Denmark on November 18th, 2019.

The Republic of Ireland’s return to action, with fixtures away to Bulgaria and at home against Finland.

Nope - all matches are currently being played behind closed doors due to the Covid-19 pandemic.

In that case, how can I watch it?

Frustratingly neither of Ireland’s fixtures are available to watch on terrestrial television with Sky having the rights to both. Coverage of the Bulgaria match starts at 7pm on Sky Sports Football, with coverage of the Finland match starting at 5pm on the same channel immediately after Wales against Bulgaria. So, unless you have got a Sky subscription it’s a trip to the local - if it’s even open. . .

Or if not, the Irish Times liveblog is coming out of temporary retirement and you can follow both of Ireland's fixtures throughout, available via the Irish Times sports site.

Are these friendly matches?

Nope, both are part of the prestigious Uefa Nations League (est 2018).

The Uefa Nations what?

The Nations League was devised by Uefa to try and give international friendlies a bit of meaning by providing a potential backdoor route into the European Championships and the World Cup.

Is this the first time it’s been held?

This is the second Uefa Nations League - the inaugural 2018-19 campaign was a bit of a disaster for Ireland. Grouped with Wales and Denmark (for a change) Ireland lost two and drew two of their four fixtures, finishing bottom after a string of dismal performances which ultimately cost Martin O’Neill his job.

It’s convoluted and complicated, but basically the 55 Uefa nations have been split into four divisions - A, B, C and D. The top three divisions contain four groups of four teams, the bottom group has one group of four teams, and one group of three. Teams play each other home and away, with promotion and relegation for teams who finish top or bottom of their group.

What group are Ireland in?

Ireland are in Group B4, alongside Bulgaria, Finland and Wales. Uefa have changed the format for the 2020-21 competition, to make sure there are four teams per group in divisions A, B and C. This reshuffling meant Ireland avoided relegation despite their poor showing last time.

But why does it matter?

These Nations League fixtures might seem like glorified friendlies, but they do have value. Firstly they count towards Fifa ranking points, and the higher Ireland are ranked by Fifa the better their seeding will be in the 2022 World Cup qualifiers which are scheduled to start next March.

Secondly, the best two Nations League group winners who fail to reach the 2022 World Cup or the play-offs through qualifying will be entered into the 12-team World Cup play-offs, where three places in Qatar will be on offer.

What about the Euros?

Ireland have a more pressing issue at hand, which is trying to secure a place at next year’s European Championships. The Republic take on Slovakia in Bratislava in the play-offs on October 8th. Victory would set up a play-off final against either Bosnia and Herzegovina in Zenica or against Northern Ireland in Belfast on November 12th. For Kenny, this international break will be key preparation for those crunch fixtures.

So, who’s going to play?

It will be interesting to see how Ireland line up in Kenny’s first match in charge. The former Under-21s boss will have an intimate knowledge of the promising young players who are being blooded into the senior squad, as he tries to integrate them alongside the Republic’s elder statesmen. He has also confirmed he has a clean bill of health going into the double-header.

Some Ireland players enjoyed standout campaigns in the last domestic season - particularly Enda Stevens and John Egan at Sheffield United, Matt Doherty at Wolves and Aaron Connolly at Brighton. Meanwhile Jeff Hendrick could be rejuvenated by a switch to Newcastle from Burnley, with Crystal Palace’s James McCarthy set to play a key role in midfield after four years in the international wilderness.

Doherty (28) completed a £15 million move from Wolverhampton Wanderers to Tottenham earlier this week, and the fullback has been Ireland’s most consistent, high level performer for several seasons. However, he still only has nine Ireland caps and is competing with captain Seamus Coleman for a starting berth on the right of the defence. One of Kenny’s first big decisions is how to fit both into the side - or who to leave out.

Ireland have met Bulgaria 10 times in the past - winning three, losing three and drawing four. They most recently met in a friendly in Dublin last September, Ireland comfortable 3-1 winners.

As for Finland, Ireland have played them five times, winning three and drawing two - if you count Liam Brady’s testimonial in 1990.

As of Wednesday, there was no price available for Ireland against Finland.

All the best, Mr Kenny.

So, are these just friendlies?

1 Gordon D’Arcy: If South Africa moves up north, it could all go south
2 Charlesland Golf Club set to close permanently in December
3 Davy Fitzgerald has issues with GAA’s plans for League final
4 South African franchises could join Pro16 by next March
5 When Down’s 1960 All-Ireland victory brought down barriers
Real news has value SUBSCRIBE
Crossword Get access to over 6,000 interactive crosswords