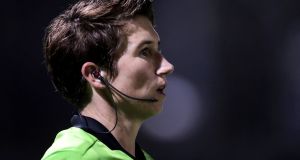 Assistant referee Michelle O’Neill: ‘As a woman you have far less room for error, but you learn to deal with it, and a lot is about player management.’ Photograph: Laszlo Geczo/Inpho

Who brings a hot-water bottle to France in June?

Michelle O’Neill, for one, thanks to her role at the 2019 Fifa Women’s World Cup.

As a Fifa-level “assistant referee” and one of the event’s 75 match officials, her luggage included every possible training and injury aid, from heat to ice-packs and foam rollers to whistles.

“I’ll be there for 5½ weeks and you have to understand that we’re a team, just like any other team. Every day, if we’re not working at a match, all the referees, assistant referees, fourth officials and our coaches have full training sessions.

“We’ll do sprint, strength and high-intensity training and then there’s coaching. They bring in players for matches and we make decisions, have video reviews and classroom work.

“We’ll still be doing something every single day, even if we’re not allocated a match. It’s full-on most days.”

Eddie Foley and O’Neill are the only Irish officials to ever work at a Fifa World Cup, and she’s the first to get a second.

The 40-year-old Enniscorthy woman was also called up for the 2015 World Cup in Canada, where her games included the quarter-final between China and eventual winners America.

O’Neill and Dubliner Paula Brady are the only women on the FAI’s 60-strong elite referees’ panel and also among the 15 qualified to Fifa level.

O’Neill has the Fifa assistant referee’s badge, the summit of her ambition given the time and commitment it demands.

“I’m very happy with the path I’m on. If I wanted to referee at this level I’d have to give back the assistant’s badge, re-train for another year and then go all the way back to Grade 3 and work my way up again to Fifa referee, which is what Paula is.”

The Recreation and Sport Management graduate from Waterford IT has given up working full-time in leisure complexes because the flexibility of being self-employed is more conducive to her “hobby” and she now teaches one-to-one swimming and aqua therapy/rehab at the Ferrycarrig Hotel.

For the past two years, for international tournaments, Fifa has paired her with French referee Stéphanie Frappart and fellow assistant Manuela Nicolosi.

The trio crewed together at the U20 Women’s World Cup in France last year, going all the way to the final, which meant they got the same gold medals as the Japanese winners.

If they get games in France they will only find out 24 hours beforehand.

“People will be waiting here on the end of the phone to get a quick flight over and I’m like, ‘lads, don’t hold your breath!’ You never know and just have to play it by ear.”

O’Neill was appointed last December when Fifa published its World Cup list of 27 referees and 48 assistants, and she’s since been to Qatar twice for over three weeks of training.

She has to pass a raft of tests annually to retain her badge, including Laws of the Game, video analysis and in-match assessments.

The fitness section includes a series of 30-metre sprints in 4.7 seconds, and doing 70 metres in 15 seconds 20 times with less than 20-second rests.

Brady, who refs in the Airtricity League and at every level of the women’s game internationally, actually has to pass an even tougher standards – the Fifa men’s ref’s fitness test – to hold onto her referee’s badge.

The middle child of six, O’Neill’s passion and ambition is shaped by growing up in a place – rural Kereight-Ballyhogue – and an era when girls had far less sporting opportunities.

She was the first girl to play football in the Rackard League (Wexford’s Cumann na mBunscol) and only got to play competitive soccer in her late teens.

“You’re going back to the time where I had to strap my hurl to my bike and cycle 10 miles to play sport. That’s what it was like then.”

She still played upfront for Wexford’s county side and won an inter-varsities with WIT, but, at a friend’s suggestion, had already started refereeing long before the advent of the Women’s National League (2011).

Any official’s pathway starts locally, first underage then senior, followed by two years’ training with the FAI’S School of Excellence. O’Neill was elevated to the Airtricity League panel in 2010 and nominated to Fifa in 2011.

Foley and Brady have been key mentors, “and Hilda McDermott, who was the first [female referee] to break down the barriers for us, and Rhona Daly”.

Ideally, no one notices match officials, but O’Neill has been caught in the glare twice, most famously in the Carlisle Grounds when she ruled that a St Pat’s shot off the cross-bar had crossed the line.

“The ball had gone out for a corner and you could easily just say ‘oh sure, no one’s seen it’ but I said ‘hang on a minute, that’s a goal!’”

“A Drogheda player ran down the line and crossed the ball and it was headed in and everyone was celebrating, but the ball had ‘just’ crossed the end-line and I called it a goal kick for Sligo.

“I think they were the change in my career, in terms of getting respect as a match official,” she says.

“I was told to ‘go back to the kitchen sink’ or ‘go home and watch EastEnders’ or ‘Coronation Street’s on’. I don’t even watch the soaps!

“They can shout and scream all they want but, if I do it to the best of my ability and do the best job, then they’re the ones that haven’t a clue.

“As a woman you have far less room for error, but you learn to deal with it, and a lot is about player management. If you make a mistake – and we do, we’re only human – you learn from it and try never to make it again.

Most of these players aren’t getting paid very much to be here, they’ve just a huge passion to win and be champions

“The guys know now what I’m about. If I do make a mistake they’ll turn around and say ‘ah Michelle, that’s not like you?’ and I’m like ‘yeah, I’m allowed one but you’re allowed 20!’ and they’ll be like ‘OK, right! You got me there!’

“In my opinion, at this level, female players are a lot more honest, if you want to use that word. Most of these players aren’t getting paid very much to be here, they’ve just a huge passion to win and be champions. If they’re bearing down on goal they generally don’t go down, they’ve only one thing on their minds.”

This World Cup has demanded extensive training because it’s the first women’s “major” to use VAR (for every game) and also involves nearly a dozen new Fifa rules which apply to all soccer leagues/tournaments from June 1st.

O’Neill reckons the goal-kick change will attract most attention; they no longer need to leave the penalty area before a defender can touch them, a change designed to speed up the game.

“Another one is that when the ball hits the referee it’s now always a dropped ball to the team who were in possession.

“We always played on before because referees were regarded as ‘part of the field’, even if the ball hit us and went into the net. Yes, that’s right,” she chuckles. “My goal-scoring days are now officially over.”