Ireland women’s captain says ‘speaking out about it is important, I’m not ashamed of who I am’ 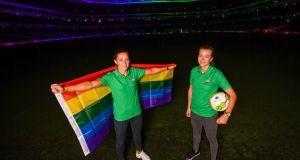 Republic of Ireland captain Katie McCabe with team-mate and partner Ruesha Littlejohn, right, at the Aviva Stadium. reland’s largest insurer are lighting up the stadium for the first time with the rainbow collours Dublin [Gay] Pride until June 8th. Photograph: Stephen McCarthy/Sportsfile

The presence of Tommy Bowe in the Aviva Stadium seemed as much a reminder that rugby Inc has never been a terribly comfortable place for gay men.

Launching the stadium’s partnership with Dublin Pride may be a step forward but the place of the former Ireland winger beside Irish soccer captain Katie McCabe and her partner Ruesha Littlejohn also highlighted a gender difference.

Anecdotally, women are more tolerant than men when it comes to accepting gay players in their team.

A gay man may have been a more appropriate fit than affable Bowe, who is not gay. But where to find one at the elite end of the Irish game in soccer or rugby is the elephant in the room.

“There’s actually no judgement,” says McCabe. “Anyone we have come across, it’s just like ‘okay, you are in a relationship’. Whether it’s with a man or a woman, no one really cares.

“I’ve never been in the men’s game! But to be fair, it [women’s soccer] is a lot more easy and a lot more accepting maybe.

“By the number and stats these days you’d say that there has to be [gay male players] but maybe they are scared to come out, they’re not comfortable – scared of being judged, being slagged,” says Littlejohn. “But I’m sure if one of them did it would be like us – who cares?”

As they tell it, there was no real courage involved in making their relationship public. But it will make an impact. McCabe has a broad fan base as one of the brightest talents in Irish football.

As a teenager she debuted for Ireland against Hungary in 2015, the same year she joined Arsenal.

“I don’t think we overthought it that much,” she says. “We didn’t overthink anything too much. We were just like ‘okay let’s support something about who we are’.

“For me, I never really hid it. I came out quite young to my family. At one point growing up in football when you are 15, 16, you’re not ready to come out.”

While Ireland have not qualified for the Women’s World Cup, which begins on Friday, McCabe’s season with Arsenal has been a successful one as the club won the league title for the first time since 2012.

She plays alongside striker Vivianne Miedema, one of the best in the world. Scoring 22 goals in 19 appearances this season the Dutch 22-year-old was voted the Professional Footballers’ Association Women’s Player of the Year for 2018-19. She averages a goal every 77 minutes.

Rubbing shoulders there won’t hurt. Ireland will also benefit from the English club and the level of play around the Irish captain. She has settled in now. But her move to England was not without speed bumps.

“It was tough at the start,” she says. “It was very hard to get into the team. I had to go out on loan to Glasgow City. They took me in, gave me game time, playing Champions League games with them, which was important.

“It kind of changed my mindset going back down. In Arsenal at the time there was a change of management – fortunately . . .I met Joe [manager Montemurro] when I went back down. I’d a really honest conversation with him. I showed him what I could do and he liked it so he wanted to sign me.”

Watching the World Cup, however, will hurt.

“I’m kind of coming to terms with the fact that we didn’t qualify,” she says. “Seeing team-mates I have back at Arsenal, going off with the other teams. Yeah we want to be there. Yeah I’m jealous they are going.

“Our focus now is the tournament in September, Montenegro and the start of our European campaign. We want to be in England in 2021.”

But you don’t play with Arsenal and captain your country without  a vein of defiance.

“Speaking about it is important. I’m not ashamed of who I am,” says McCabe. “I don’t hide anything on my Instagram or  Twitter. I am who I am, who I have always been.”

1 Tipping Point: Eddie Jones’s rhetoric is out of place in a febrile political climate
2 Maguire and Martial head Manchester United past Chelsea
3 Eddie Jones continues to revel in putting rugby’s nose out of joint
4 Rory McIlroy heads for Mexico with ‘WGC slam’ in sight
5 Andy Farrell recalls 13 players to Ireland squad ahead of England clash
Real news has value SUBSCRIBE
Crossword Get access to over 6,000 interactive crosswords