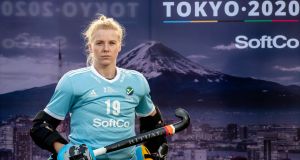 Ireland Women’s hockey goalkeeper Ayeisha McFerran: ‘We definitely have the confidence and the belief that we can do something special again, that we will qualify for Tokyo and perform the way we know we can.’ Photograph: Morgan Treacy/Inpho

Ayeisha McFerran isn’t one for looking back, and as much as it might be tempting to while away the hours watching replays of last summer’s magical World Cup odyssey in London, her focus is fixed firmly on the challenges to come, the chief one being helping Ireland qualify for the 2020 Olympic Games.

Still, though, the past year has been so momentous a spell in her life, both on the sporting and personal front, it’s impossible to resist taking an occasional glance back and, humble as she is, not to feel proud of how far she’s come.

The 23-year-old McFerran, after all, has only to think back to what her 15-year-old self had to come through, emotional challenges that could have broken the best of us. But here she is now, one of the most highly regarded goalkeepers in world hockey who is unlikely to be short of offers from leading clubs for next season having completed her four years at the University of Louisville, which she attended on a hockey scholarship.

“Finished, graduated, got my piece of paper!”

She’s hoping, though, that she won’t need to use her degree in exercise science to find full-time employment for a while yet, her ambition being to play professionally – or at least semi-professionally – next season. But she’s setting that aside for now, “it’s business time with Ireland and that’s the priority”, she says, the FIH Series Finals in Banbridge (June 8th-16th), phase one of Ireland’s attempt to qualify for Tokyo, the most pressing matter in a busy 2019 schedule.

“Honestly, I have no idea where I’ll end up come September, maybe I’ll start talking to a few clubs and see what the craic is. But I’ve been so focused on trying to finish well academically in Louisville and, now, preparing for Banbridge, that I haven’t given it a whole amount of thought. I will, though, when the time comes.”

It was, she says, strange saying goodbye to Kentucky and that period of her life, during which she enjoyed enormous personal success with the college team, being voted on to the “All-America First Team” four years running.

“It was definitely weird leaving, there were mixed emotions because although I’m excited to be back home with the girls [the Irish squad], it was very sad leaving the place I called home for the past four years. And it really was a home, a family, you spend so much time with the team, you learn so much about each other and you definitely make memories that last forever. It’s crazy how it all turned out, I thought I was just going over to play a bit of hockey for the craic and get an education, but it turned out to be a lot more than that.”

For McFerran, an accomplished Irish dancer in her youth too, sport became much more than a hobby when she was a young girl, it was her “refuge” from when she was nine and her mother Sandra began her battle with breast cancer, a battle that ended with her death when McFerran was 15.

“Everyone has their own story and their own normal growing up, for me that was my normal. I definitely used sport as a refuge. I was that crazy kid, endless energy, so when Mum was sick I couldn’t be bouncing around the house banging my head off the walls. So having sport was a release for all the anger I felt about everything that was going on. Why was this happening to us? All that.

“No matter what sport I played I was always considered a bit aggressive, I don’t know if that’s just me or whether it was about me taking my anger out because of what was happening. But it was definitely a release for me, I think I needed it at the time to figure out who I was as a person. I’ll always be thankful to my Mum for pushing me in to hockey because of the opportunities it has given me to be where I am today.”

She is endlessly grateful, too, to the local foster family she lived with for the three years after her mother’s death, McFerran and two of her siblings having initially gone in to care, their parents having separated some years earlier. Her older sister was 18 at the time, so she was afforded no such safety net.

A year ago, in response to Irish sprinter Leon Reid talking about his youth growing up in foster homes, McFerran took to Twitter to salute him, as well the system she came through in Northern Ireland, one she says gave her a second chance after the loss of her mother. “The foster system is NI has been a massive stepping stone to my success and without it, I wouldn’t be where I am today, from supporting me with my education to enabling me to compete in my hockey around the world & for that I’m very thankful #thesystemworks,” she wrote.

She laughs, though, when she recalls what her foster-family-to-be was advised about the young girl who would be entering their lives. “They were just told that they were getting a kid who played hockey, so they thought it was just school hockey on a Saturday morning. Little did they know it would involve trekking around the country, training every day of the week, endless journeys. But I was so fortunate that they were so supportive, I am very, very thankful for them, they really helped me on this journey.”

Having been involved at underage level all the way up with Ulster and Ireland, playing her club hockey with Larne, Randalstown and then Pegasus, McFerran made her senior international debut the day after her 18th birthday. So all encompassing had the sport become in her life, then, her foster family were never off the road.

It was when she returned home to Larne after the World Cup that she had one of her weirder life experiences, she says, being recognised on the street not something she was accustomed to. “People shouting out of cars at me, stopping to chat with me, weird is the only word. But nothing was weirder than going in to one of the bakeries in Larne and seeing biscuits with my face on them. I was like, ‘What on earth is going on here?’”

Did you buy one?

In January, though, when the Irish squad travelled to Chile, the players decided it was time to “park” what happened in London and start looking ahead rather than back. “If you keep living on that, you’re going to go nowhere else,” she says. “So we’ve had to put aside all the hype of last year. If we sat on it for any longer it would have been a waste of time. We always knew we could do something special, we’re a very talented group of girls and we get on so well as a group, but we definitely have the confidence and the belief that we can do something special again, that we will qualify for Tokyo and perform the way we know we can.”

The build-up to Banbridge hasn’t, though, been between its setbacks, none greater than the loss of coach Graham Shaw to the New Zealand women’s team. “It was definitely disappointing,” she says, “but we knew that he was going to be head-hunted after such a successful World Cup. It’s a great opportunity for him and his family, we are very happy for Graham and just very thankful for our time with him. It’s a new chapter in his story, but we’re very excited to get Sean [Dancer – Shaw’s successor] in return for the next chapter in our book, he knows his stuff inside and out. Hopefully we’ll see New Zealand in Tokyo,” she laughs.

You’ve done all right for yourself?

“Aye,” she laughs, “at times it does feel weird. I’m this little girl from Larne, where not much happens apart from the boats going in and out. A kind of crazy little girl. So to be sitting here now, to have that World Cup silver medal around my neck, and hopefully be heading off to Tokyo when we qualify . . . you don’t hear many stories like that coming out of Larne. It’s been some journey.”