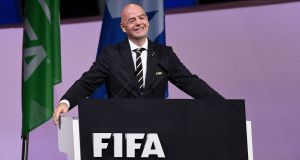 British and Irish hopes of hosting the 2030 World Cup were plunged into doubt on Wednesday when Fifa president Gianni Infantino said he hoped the rules would be changed to let China bid, too.

Under the ‘rotation’ rules used for the most recent contest, countries from a confederation that has hosted one of the two previous World Cups are not allowed to bid.

With China’s fellow Asian Football Confederation member Qatar staging the tournament in 2022, this would appear to rule out a bid from the world’s most populous nation and second largest economy.

But speaking to reporters in Paris after his unopposed re-election as Fifa boss, Infantino confirmed the rumours that have been circulating in recent months: the regulations for 2030 could be ripped up, paving the way for a blockbuster bid from China.

Asked for an update on the rules and timeline for the bidding process, the Swiss-Italian said: “I don’t know because these decisions are taken by (Fifa’s ruling) council and we will discuss this at our next meeting in October, which is in Shanghai.

“We’ll also see if there can be a bid from China but, for me, the more, the merrier.”

It is widely believed that 2022 will be too soon to stage a bidding contest, so it seems certain that the final decision will be taken at the 2024 Fifa Congress.

Having lost bids for the 2006 and 2018 World Cups in embarrassing fashion, the Football Association has been considering another go for several years and has been in active talks with the other Home Nations and Ireland about a joint bid for at least 12 months.

They are currently conducting a ‘feasibility study’ to work out if it is worth bidding and have said they will only go for it if they believe there is a genuine chance of success.

When the main potential rival was a joint South American bid from Argentina, Chile, Paraguay and Uruguay, it seemed as if a British/Irish bid was a certainty but the field was getting more congested even before a Chinese challenger emerged.

Previous experiences have taught the FA there is little point even starting the race unless it can count on the unanimous support of Europe, and Uefa president Aleksander Ceferin has made it clear he wants his 55 member associations to get behind just one bid.

That might be wishful thinking, though, as Spain and Portugal are keen on bidding, perhaps in a cross-confederation bid with Africa’s Morocco, and Bulgaria, Greece, Romania and Serbia have also expressed their interest in teaming up.

But all of those candidates will be worried about China, which some close observers of Fifa politics believe has effectively been told it can have a World Cup whenever it is ready to stage one.

The reasons for that are obvious: it is the world’s largest and richest country never to have hosted a World Cup, Chinese sponsors came to Fifa’s aid when some western firms backed away following the 2015 corruption scandal and Chinese premier Xi Jinping has made no secret of his football ambitions, including seeing China win a men’s World Cup.

Hosting a World Cup in 2030 would be a stepping stone to that goal and it is perhaps telling that China has just done a deal with South Korea to back its bid for the first revamped Club World Cup in 2021 in return for the Koreans letting China host the Asian Championships in 2023.

Wexford hurlers win entertaining contest against Laois 23:03
James Durcan steals a draw for Mayo in Ballybofey 22:25
David Clifford sends everyone back to their corners unbeaten 22:09
Agony as Leitrim are denied victory at the death by Derry 19:31
Limerick roar from behind to sink Tipp and start league in style 19:54

1 David Clifford sends everyone back to their corners unbeaten
2 Limerick roar from behind to sink Tipp and start league in style
3 Mike Catt hopes to have Irish backs purring in Six Nations
4 James Durcan steals a draw for Mayo in Ballybofey
5 Six Nations: Ireland are contenders but England still the team to beat
Real news has value SUBSCRIBE
Crossword Get access to over 6,000 interactive crosswords