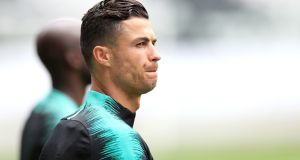 A lawsuit filed last September in a Nevada court accusing Cristiano Ronaldo of rape has been dropped. Kathryn Mayorga, who came forward with her story last year, claims the Juventus and Portugal star used “fixers” to stop her pursuing criminal charges, including paying her $375,000 to keep quiet. She has alleged Ronaldo assaulted her in a Las Vegas hotel room in 2009.

However, Rafael Buschmann, a journalist for Der Spiegel, says the state case has only been dropped so it can be refiled in federal court. Las Vegas police confirmed to the Guardian in an email that their investigation is still open. “The LVMPD criminal investigation involving Cristiano Ronaldo is still ongoing,” wrote a spokesperson.

“The case is not closed,” wrote Buschmann on Twitter. “It is just at a different court now. After it was not possible for Mayorga’s lawyers to serve Ronaldo with the complaint, they filed it at a federal court.”

Ronaldo has denied Mayorga’s allegations. “I firmly deny the accusations being issued against me,” he said in October 2018. “Rape is an abominable crime that goes against everything that I am and believe in. Keen as I may be to clear my name, I refuse to feed the media spectacle created by people seeking to promote themselves at my expense. My clear conscious [SIC]will thereby allow me to await with tranquillity the results of any and all investigations.”

The 33-year-old Ronaldo is one of the most famous athletes in the world. He is a five-time winner of the Ballon d’Or, an annual award for the best footballer in the world. He is also a national hero in Portugal, and led his country to the European Championship title in 2016.