Tottenham’s Christian Eriksen says he is ready to move 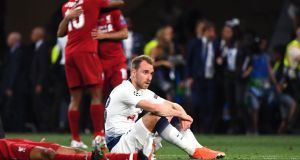 Christian Eriksen has confirmed the worst kept secret at Tottenham – that he wants to take on a new challenge at another club this summer. The 27-year-old Denmark midfielder, who has been at Spurs since 2013, has one year to run on his current contract and has shown no inclination to renew for another cycle in north London.

Spurs cannot afford to allow him to run down his deal and leave as a free agent next summer, given his high value at arguably the peak of his career and the fact that they have repayments to make on their new stadium project. Consequently, they have let it be known in recent weeks that he would be available at a price, albeit an extremely high one.

Daniel Levy, the chairman, has quoted £130m for him, which might seem like wishful thinking but it offers an impression of where he is drawing the lines for negotiations. Eriksen has repeatedly refused to discuss his next move with reporters and last week, ahead of Spurs’s Champions League final against Liverpool, which they would lose 2-0, he turned on his heel and left one interview when asked about his future.

“I hope that something will be decided this summer. That is the plan. In football you never know when there could be a decision like that. It could be at any point. The best thing is always for it to happen quickly but in football things take time.”

Eriksen has been heavily linked with a move to Real Madrid, who are looking to add marque signings this summer for Zinedine Zidane after a desperately disappointing season.

“Real Madrid is a step up but then it would take Real Madrid picking up the phone and making contact with Tottenham and say that they want Christian,” Eriksen said. “And that they haven’t done as far as I know.

“It all depends on Daniel Levy and there has to be another club too. Or I will sit down myself at the table and negotiate a new contract. You can’t set a date yourself. There aren’t many boxes that Tottenham don’t tick so if I have to move away, it would have to be a step up.”

Eriksen was asked whether he would seek to run down his contract. “That is difficult to say,” he replied. “It depends on the possibilities. If there are no exciting offers why shouldn’t I stay at Tottenham? If I then sign a new contract depends on the conditions.” – Guardian