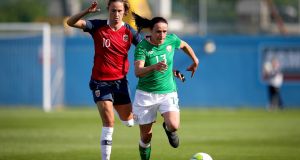 The last Ireland player to hit the century mark of caps finished the night in Gelsenkirchen held aloft, and Áine O’Gorman would settle for her own dose of euphoria upon reaching the milestone on Tuesday evening in Norway.

Unlike John O’Shea’s big night in Germany almost four years ago, the women have a must-win qualifier on the occasion of O’Gorman’s celebration. Colin Bell’s side require an unlikely victory in the penultimate fixture of the campaign in Stavanger to stand any chance of claiming a play-off into next year’s World Cup in France.

O’Gorman and her colleagues have an insight as to the scale of the task fresh in their minds, having fallen only last Friday to a convincing 2-0 defeat against the same opposition at Tallaght Stadium.

It was the first international for the Enniskerry native since the opening win over Northern Ireland last September. The medial knee ligament injury sustained in Lurgan that night was compounded by dental trouble on her return, leaving the 29-year-old feeling a tad detached from the ground made during her absence.

Two more wins over Slovakia, sandwiched in between by the famous draw against the Netherlands last November, generated a degree of expectation that a first major tournament could be reached, only for consecutive home defeats against the higher seeds pushing them into last-chance saloon territory.

Harriet Scott will once again be unavailable through injury, with Diane Caldwell another absentee through suspension. Yet another centre-back, Louise Quinn, will start replete with a mask to protect the broken nose she suffered five days ago.

“A lot has changed in the set-up since I made my debut at 16 against Denmark,” said O’Gorman. “This is the closest we’ve come to qualifying since reaching a play-off 10 years ago but I believe we can do it. Although Norway are strong, they have weakness we can exploit.”

Only three points on Tuesday night will suffice for their final game against Northern Ireland on August 31st to hold relevance for their qualification quest.

1 Barcelona in crisis as six board members resign in protest
2 Ireland boss Stephen Kenny: ‘I’ll do things my own way. Put it that way’
3 My favourite sporting moment: When Ireland rocked Kingston and rolled Pakistan
4 Andrew Conway diary: Nailing the wheelie bin challenge on the double
5 UFC 249 cancelled after Disney and ESPN intervention
Real news has value SUBSCRIBE
Crossword Get access to over 6,000 interactive crosswords