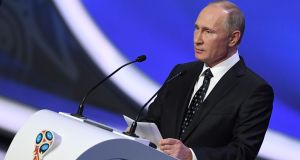 This World Cup effectively gives President Vladimir Putin another nod and wink that his actions don’t have repercussions beyond the token. Photograph: Kirill Kudryavtsev/AFP/Getty Images

It’s a World Cup best watched with a “mute” button. Silence will be golden during such a sham. Players look the same on screen wherever they are but a Putin’s Russia narrative is too much to stomach. The World Cup shouldn’t be in Russia. It shouldn’t be Putin’s plaything. And it will be.

Maybe we’ve become so desensitised to political expediency that the incongruity of “The Greatest Show On Earth” taking place in Russia doesn’t register. Or maybe we simply don’t like political footballs of any kind. But this is grotesque.

There’s nothing more normal than kicking a ball. Yet for the next month Putin gets to wrap that normality around his abnormal regime. He can preen in the reflection of Messi and Ronaldo and the world is going to play along.

No doubt there’ll be cant about addressing human rights issues and some soothing diplomatic speeches about freedom and tolerance. We can probably look forward as well to banalities about the world family and its devotion to the beautiful game overcoming differences.

And then the World Cup will begin with a clear message to everyone, most especially to Putin himself, that the past really is a foreign country.

So it doesn’t matter that Russia was complicit in the shooting down of MH17 with the loss of 283 lives. That was greeted with outrage when it happened. Where’s it gone?

Nor apparently does it matter that Ukraine’s sovereignty was trampled over by the annexation of the Crimea. And lives lost in Syria due to Russian involvement there are seemingly irrelevant. Outrage’s expiry date just gets shorter and shorter.

Political opposition in Russia can get you gunned down or imprisoned. It’s where the colour of your skin is such an issue that the England player Danny Rose has told his family to stay away. It’s where gay “propaganda” is illegal.

Russian agents have used nerve agents and radiation poisoning overseas. There has been repeated interference in overseas elections including the 2016 US presidential race. These are the actions of a rogue state.

Other countries on Russia’s borders, particularly the Baltic states, live in daily dread of Putin indulging his inner Stalin and acting on what he presumes to be his nation’s entitlement.

It’s in such a context that the Russian state’s “unprecedented attack on the integrity of the Olympic Games and sport” through systemic cheating at Sochi in 2014 can be viewed as trifling, although reflective of a wider institutional disdain for international norms.

What Russia has done for much of the last decade is outrageous. We ridicule Putin as a crass popinjay yet fear his wilfulness. None of this is normal. Yet a World Cup spectacle in Russia helps normalise it. And that’s simply wrong.

Boris Johnson’s Colonel Blimp shtick ordinarily makes him a shaky reference point. But just because Britain’s foreign secretary is wrong most of the time doesn’t make him wrong all of the time.

Despite accusations of diplomatic foolishness, he’s correct to compare this World Cup to the 1936 Olympics in terms of being defined by a single political figure. Already this World Cup is being framed in terms of taking place not in Russia but in Putin’s Russia.

Over the years the World Cup has been hosted by sinister dictators and nasty tin-pot military regimes. They all had viciousness in common. None were able to utter Einstein’s old line about World War Four being fought with sticks and stones and make it sound so chilling.

But it seems no level of toxic dysfunction is enough to stop the world looking to Russia for its summer entertainment. Invasion, murder, prejudice, cheating, intimidation and brutality haven’t been enough to make the West pick up the ball and go home.

No doubt it’s to do with gas, oligarch billions and the niceties of contractual obligations. It’s just realpolitik, the give and take game played by those who deal with the world as it is rather than how they wish it to be.

But this World Cup effectively gives the Russian president another nod and wink that his actions don’t have repercussions beyond the token. Instead, he gets a perfect propaganda opportunity for bolstering his bovine support by showing them how western outrage is just talk. They don’t mean it.

History is littered with the dangers of being perceived to talk for the sake of it and an opportunity has been lost here.

Instead a supposedly life-affirming celebration is taking place in an atmosphere of squalid political cynicism. And in four years we can look forward to Qatar and another regime paying for international prestige even though it means playing the beautiful game in a desert.

The signal from all this is once again that major sporting events need to be decentred in future.

There’s no reason for the Olympics to be confined to a city or the World Cup to a country. For the vast majority of the audience these are screen experiences. It doesn’t matter if the World Cup final is in Moscow or Montreal. It looks the same on telly. Advantage should be taken of that.

It’s the everyday reality for elite club football. Travel is cheap for those who watch first-hand and the principal audience is second hand anyway. It’s time to give up this palm-greasing host game that plays into the pockets of dubious regimes at odds with the spirit of human decency that sport is supposed to represent.

It might restore a little faith in political outrage too which this World Cup indicates really is right now little more than an inverted pyramid of piffle.