Eamon Dunphy: ‘I wouldn’t want to be going to Russia’ 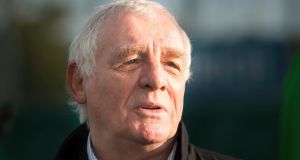 Eamon Dunphy: “Qatar, which is a pretty appalling place, has the 2022 World Cup.” Photograph: Gareth Chaney/Collins

RTÉ soccer pundit Eamon Dunphy has expressed his concern over potential racism and hooliganism when the World Cup begins in Russia later this month.

The television veteran has become dismayed over world events going to what he sees as corrupt regimes where racism is endemic. He also believes the enmity between the England and Russian fans could become an issue.

“I wouldn’t want to be going to Russia, to be honest,” said Dunphy. “I don’t think (a) they should have the thing. And (b) there will be racism, which is really appalling.

“Zenit (St Petersburg) can’t sign a black player. They are the second-top team in the league. The racism is evident if you look at Champions League matches. What are they going to do when Nigeria, or any of these black lads are playing. It’s just not right.

“The racism could become appalling. Ugly. Offensive to people. I will certainly address it if it arises.”

Referencing Qatar, who will host the 2022 World Cup, Dunphy says it is increasingly the case that major sports events go to countries that are trying to present themselves to the world as respectful to all citizens.

“Qatar, which is a pretty appalling place, has the 2022 World Cup,” he says. “These major things – Olympics and World Cups – are inextricably linked to corrupt regimes, who use the occasion to sanitise themselves.

“The first one I remember is Berlin [1936 Olympics], where the English team actually gave the Nazi salute. You’d think the more money in sport, the more resistant they would become to corruption. But it’s the opposite.”

He can’t remember exactly how many panels he has been on with RTÉ for World Cup coverage. But there have been many.

“I walked out the night before the final of the ’86 World Cup. In 1990 I went to America. I’d fallen out with them over money, I think. Not sure how long that lasted.”

1 Royal Portrush: Golf clubs ‘in real distress’ as eyes turn to 2021
2 Colin Kaepernick’s exile is too fresh for NFL to speak out on US protests
3 Rodgers shunned by some family members for leaving Celtic
4 Fitzgerald says inter-county game should resume before club fare
5 Shane Ryan: Shark attacks and gruelling shifts on a Covid-free Atlantic mission
Real news has value SUBSCRIBE
Crossword Get access to over 6,000 interactive crosswords