Ken Early: Why the World Cup outcome is so difficult to predict 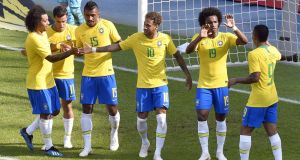 Brazil players celebrate a goal during their 3-0 victory against Austria in an international friendly on Sunday in Vienna. Photograph: Getty Images

The last time the World Cup was won by a team that could realistically have been considered the best in the world at any level was in 2002, when Brazil’s winning side included Ronaldo, Rivaldo, Ronaldinho, Roberto Carlos and Cafu: five world-class stars, who played for five different clubs.

Back then the world’s best players were more evenly distributed across Europe’s top clubs. The years since have seen the gravitational pull of the very richest clubs increase to the point where their squads are more powerful than that of any national team.

Club football has been through three tactical revolutions in that time. First came the hard-running powerball led by Jose Mourinho, Rafael Benitez and Carlos Queiroz and branded by Jorge Valdano as “shit on a stick”. Then there was the extreme possession-position game of Guardiola-era Barcelona, and after that, the high-energy pressing game associated with Jurgen Klopp and others that spread out of Germany in the 2010s.

The underlying force behind each of these new approaches to the game was the ever-increasing athletic capacity of ever-more-professionalised players. But each new way of playing also depended on an unprecedented level of training-ground organisation and on-field choreography: the kind of stuff you need to work on every day if you hope to get it right consistently in matches.

Since international teams only train together for a few days at a time, a few times a year, they have found it almost impossible to keep up with the evolution of the club game. This is why the last two World Cups have been won by the team that is most like a club side.

You could already detect the beginnings of this trend in 2006, when the standard of club football was just beginning to pull away from the international game. Five of the 14 Italian players that won the final came from Juventus, with three each from Roma and Milan. It was Italy’s organisation that ultimately set them apart from the opposition in a low-quality tournament.

By 2010 club football had evolved on to a new level, and it was really no surprise to anyone at the time that Spain, a team that included six regular starters from Barcelona, then the world’s best club side, won the World Cup without conceding a goal in the whole knockout phase.

The narrow victories by which Spain progressed to winning that tournament belied their intimidating dominance. It wasn’t that it was difficult to score against them, it was difficult simply to get the ball off them. Nobody had ever controlled international football matches like this before.

Spain’s victory was about more than just the technical skills of a great group of Spanish players – many failed Spanish World Cup squads of the past had included great players. It had to do with the fact that the spinal players in the team – Pique, Puyol, Busquets, Xavi and Iniesta – could take their world-beating club game seamlessly on to the international stage.

In 2014 the World Cup winners were another great club side featuring guest stars: seven of Germany’s 14 players in the final came from Bayern Munich, who had reached two of the previous three Champions League finals, and had then been coached for a year by Pep Guardiola, who had trained so many of the players from Spain’s 2010 side.

In seven matches on their way to the final, there were about 20 minutes when Germany did not seem to be serenely in control. Ghana scored twice in nine minutes in Fortaleza, before Germany grabbed an inevitable equaliser, and in the second round the pacy and enterprising Algerians gave them a fright towards the end of 90 minutes, before Germany turned the screw in extra time. The German players’ deep familiarity with each others’ games helped to settle them in these difficult moments; when the pressure came on they did not panic, they just kept doing what they always did, confident that their gameplan would prevail.

Even now one of Joachim Löw’s favourite buzzwords is “automatic” – the capacity of his players to know what to do without having to think about it. Though a word like automatic chimes with old cliches about the cold-blooded efficiency of German machine-tool football, you could see what Löw was talking about when Germany dismantled Portugal 4-0 in the opening game, or when they destroyed Brazil in the semi-finals.

It’s not as though Germany’s players at an individual level were far better than the Portuguese or Brazilian players. The 11-1 aggregate superiority was down to superior teamwork.

The 2018 World Cup is harder to predict than the last two editions because none of the leading sides is actually a Champions League-dominating club team in disguise. Spain and Germany are again the closest, but neither looks as convincing as in the years they went on to win. Spain have four players from Barcelona and six from Real Madrid, but the Barcelona contingent are past their best and most of the best Madrid players are not Spanish.

Germany have seven Bayern players, but the only one who goes into the tournament off a great season at club level is the young right-back Joshua Kimmich. The most talented squads are Brazil and France; in the absence of any supremely organised rival this time around, might 2018 be the first World Cup in a while when pure talent makes the difference?

1 ‘A radical departure’: Who are CVC and what are their aims with rugby?
2 Ken Early: Ken Early: Why international football is fading into obscurity
3 All in the Game: Nigeria bite back in war of words with Redknapp
4 Connell losing touch with club championship is real tragedy of Normal People
5 Colin Kaepernick’s exile is too fresh for NFL to speak out on US protests
Real news has value SUBSCRIBE
Crossword Get access to over 6,000 interactive crosswords