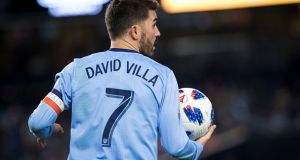 At the start of the third quarter, Vanderbilt University’s Sarah Fuller strode on to the field and squibbed the ball 30 yards into Missouri territory. One small kick-off for her team. One giant leap for her gender.

A six foot two soccer goalkeeper by trade, the first woman to play in a Power Five Conference collegiate grid-iron game had 32 on her back, a decal that read “Play Like a Girl” across her helmet, and wore the burden of so much history rather lightly.

Fuller had been preparing to go home to Texas for Thanksgiving last Monday when every Vanderbilt kicker was ruled out through Covid-19 and the head coach asked her to step in. Within the hour she started practicing and by half-time at Faurot Field last Saturday, she was confident enough to berate her new male colleagues for the sideline being too quiet.

She demanded they generate more noise in support of those on the field, as her soccer team-mates did on their way to winning the South-Eastern Conference title last month.

That Vanderbilt were trounced 41-0 by higher-ranked Missouri and Fuller never got the opportunity to try for a field goal mattered not a jot in the greater scheme of things. Her achievement was lauded by everybody from Billie Jean King to LeBron James. Another milestone for women in sport. One more crack in the glass ceiling. Beyond the giddy headlines and the undoubted feelgood story of the moment, however, two grim yarns have gained much less national traction and are far more troubling.

In San Francisco, KTVU television ran a damning investigative report in which 12 women who played soccer at University of California Berkeley recited a litany of charges against coach Neil McGuire. Aside from vehemently criticising their on-field performance, they claim he castigated players about their weight, their refusal to play through injuries, and their personal lives (he mocked one relentlessly for joining a sorority on campus).

They contend he operated a regime based upon fear with both training and games regularly punctuated by sustained outbursts of anger and vicious, personalised tirades.

Born in Edinburgh, McGuire once played for Falkirk and boasts a coaching resume that includes prosperous stints at Mississippi State and Texas Tech. At Berkeley, he’s made the NCAA tournament 12 seasons out of 13 and counts Alex Morgan, the vaunted United States international striker, among his alumnae. A dozen lesser-known graduates now maintain this impressive record came via bullying, a dysfunctional approach that included singling out individuals during abusive rants, fat-shaming, and, bizarrely, blaming those who didn’t play for certain defeats.

“And those of you who sat on the bench,” he roared at the unused substitutes after one match, “this loss is equally your fault because you’re not good enough for us to play you.”

All those culpable were handpicked by him to come to one of the most prestigious schools in the country. If that makes a mockery of his criticism, the real story here is the reaction of the university. When various individuals went to the college authorities over the years, voicing concerns this toxic environment was causing women to suffer depression, anxiety and body dysmorphia, the athletes felt those in charge never took accusations of emotional abuse seriously.

When contacted by KTVU, Berkeley used the defence that the matter is now the subject of legal action so they couldn’t possibly comment.

In a similar vein, New York City FC didn’t exactly distinguish itself either when Skyler Badillo complained she had been sexually harassed by former Spanish international David Villa. At 20, Badillo was a college student studying to be an athletic trainer when she secured an internship with the Major League Soccer club. The stuff of undergraduate dreams became the source of all her nightmares as the club’s biggest box office attraction started to creep on her.

“I thought I was getting the opportunity of a lifetime when I got that internship,” tweeted Badillo last July. “What I got was David Villa touching me every f--king day and my bosses thinking it was great comedic material.”

Although Villa denounced the allegation as “entirely false”, Badillo went into much more specific detail to back up the charge made in her initial tweet, especially in an interview with The Athletic last month.

“I was standing there and my back was to David,” said Badillo of just one of several incidents witnessed by her boss. “He got up and walked up behind me and put his hands on my hips and sort of pressed me into the counter I was standing at and whispered, into my ear, that I should ‘be careful of men in the city.’ And then he just left . . . ”

A New York City FC investigation concluded a small number of players and staff had behaved inappropriately, and were guilty of “unnecessary physical contact, teasing, and comments regarding clothing and appearance.” The club also promised to do better by making structural changes.

Yet, nobody was really sanctioned, the now-retired Villa is part-owner of Queensboro FC, another pro soccer team in New York, and looks like he will emerge unscathed. Much like Neil McGuire in California currently being celebrated for recruiting a very strong class of high school players for next season.

If Sarah Fuller offered a chance to celebrate women in sport and to revel in her effervescent attitude, the reality is progress remains one step forward, two steps back.