Hope Solo not giving up on her football dreams just yet 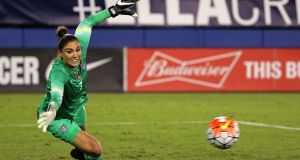 Hope Solo: “I want to win medals, I want to win big tournaments. Those are the moments in my career that I have lived for.” Photograph: Mike Ehrmann/Getty Images

When Hope Solo’s autobiography was published five years ago, when she was 31, it was always likely that it would require a sequel down the road. Maybe even a few. Hers is a life less ordinary, after all.

As it turned out, the five years since its publication probably merit a sequel all by themselves.

In that time Solo collected her second Olympic gold medal and won the World Cup, before receiving a six-month suspension and having her contract terminated by the United States Soccer Federation.

The journey from hero to zero was turbo-charged.  There was plenty of turbulence in her private life too in that period, including being charged with assaulting her sister and 17-year-old nephew during a row at their home – a case that has still to be legally resolved.

What you’ll rarely find in Hope Solo’s story, then, are dull moments.

An often stormy relationship with the federation finally blew up in the summer of 2016 after she described the Swedish team that beat the US in the Olympic quarter-finals as “a bunch of cowards” because of their negative tactics.

She won her 202nd cap as her country’s goalkeeper in that game, but she hasn’t set foot on the field of play since. US Soccer viewed her comments as one transgression too many, the sharpest of tongues getting her in to bother multiple times before. They ended her contract and send her in to exile for six months.

She apologised for her remarks, but was incensed by her punishment. Her critics saw it as a long time coming, she viewed it as payback for her taking on the federation on equality issues, Solo among the players who filed a complaint against them with the US Equal Employment Opportunity Commission over wage discrimination – a battle that was partially won last April.

“I became quite the thorn in their side,” she says. “Fighting for better work conditions, fighting for better hotels, better travel, fighting for equality with the men, over a total of 20 years that got exhausting. I’m not really sure what more I could have done in terms of fighting for women’s rights. So I’m very proud about that. And I’m going to continue doing it. We have a long ways to go.”

“And I will tell you, the US team could have learnt a thing or two from the women of Ireland,” she says, in reference to the Irish team’s battle with the FAI earlier this year.

“I learnt from my grandma and my mom to always stand for what you believe in – it’s not an easy road by any means, but I know that I’ve taken it and I am proud about that. Unfortunately not everybody has the courage. But in Ireland the women fought so hard just to get basic rights on loss of earnings, even things like hotel Wi-Fi and apparel.”

“What they did, especially the young players, took so much bravery. It’s incredibly hard to get 20-something women together to take a stand against a federation when there’s that fear of never playing for your country again. You are definitely taking a risk.

“And the Irish federation said something similar to my own, that playing for your country is an honour – they don’t really deem it worthy enough to be called a job. I really wish that our entire United States team did the same as the Irish did, showed the same unity, and put their foot down against the federation. There’s so much more to fight for, so much more to be done, but your women’s team has done so much for the sport of soccer.”

Solo is torn, though, on another issue involving sports people taking a stand – or, in this case, a knee.

“It’s a very complicated time,” she says of the current wave of protests in the NFL in response to criticism from Donald Trump of those choosing to kneel during the national anthem.

“It’s difficult because people have different reasons for why they do or don’t take a knee to the anthem, but for me what is most important is respect for people’s decisions.”

“I 100 per cent support my team-mates who have wanted to kneel. I 100 per cent supported Colin Kaepernick [the former San Francisco 49ers quarterback who kick-started the protests last year]. I have been in that position when a team-mate asked all of us to kneel for the national anthem, but, on a personal level, it’s not something that I’ve ever decided to do. And keep in mind that I’m married to a black NFL player [Jerramy Stevens, who played with the Seattle Seahawks and the Tampa Bay Buccaneers].”

“I would never take a knee to the national anthem because, first, I come from a military family; second, I recognise that I have had many opportunities being born in America that perhaps I would not have had elsewhere. I’ve been proud playing for my country when I put on the uniform.

“In the same breath, I recognise the social injustices against black Americans. It’s just all a little convoluted right now. People are protesting against Donald Trump, against police violence, there are a lot of different issues going on that are all being put in the same bucket. I think it puts a lot of pressure on players, whether to kneel or not. It’s a very tricky topic, but I definitely respect everyone’s individual rights.”

In Kaepernick, who is now without an employer, Solo sees a little of herself.

“I’ve risked everything to stand for what I believe in too – and I don’t have a job either. So of course I have deep admiration for players like him, for standing up for what they believe in. For trying to change the world for the better. They’re not creating violence, they’re standing against it.”

Whether or not Solo will ever get to hear the US anthem again while on duty for her country, she’s not sure. She used her time out from the game to have surgery on her shoulder and expects to be fully recovered in the months ahead. She says she has had offers from clubs “overseas” and may return to Europe, where she had spells before with Gothenburg and Lyon.

“But I’ve been focused on my rehab to ensure that if and when I do come back, I’ll be better than I was before. And my competitive nature tells me that if I return I still have to be the best, I won’t settle for anything less. I’m 36 years old, but many goalkeepers don’t peak until in to their 30s or even their 40s.”

“I definitely want to get back on the field, play for a new club. If I was asked to go back to the US team . . . I don’t even know if I could stand for it. Unless they make some major changes. But if the 2019 World Cup rolls around and I’m not on the field, it’s going to be very difficult because I want to win medals, I want to win big tournaments. Those are the moments in my career that I have lived for.”

Hope Solo will be a speaker at the One Zero sports conference in Dublin on October 17th - information about the event can be found at one-zero.com.

1 Seán O’Brien: Anger over my parents’ break-up never left me
2 2020 All-Ireland Senior Hurling Championship key dates
3 Hugo Keenan and Will Connors: The best of friends, the best of debuts
4 All-Ireland SHC 2020: Our writers and pundits make their predictions
5 Ireland get the job done against Italy to keep alive Six Nations hopes
Real news has value SUBSCRIBE
Crossword Get access to over 6,000 interactive crosswords