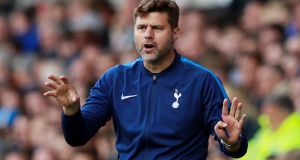 Since his arrival at Tottenham in the summer of 2014, Mauricio Pochettino has sought to build a collective spirit, on and off the field, and nights like Wednesday are a part of the process. Photograph: Reuters/Jason Cairnduff

The Observer’s restaurant critic, Jay Rayner, came away from Beast in 2014, shortly after it had opened in London’s West End, with a piece of advice. “Go there with someone else’s money, because God knows you’ll need a lot of it,” he wrote. “Got any friends who are, say, international drug barons? Excellent. They may be able to afford dinner.”

Mauricio Pochettino, presumably, had not read the review because he went to Beast on Wednesday night with 49 of his colleagues from Tottenham Hotspur and he paid for them all. The chairman, Daniel Levy, was there, along with the entire first-team squad, Pochettino’s assistants and assorted others from across the staff. And very nice it was, too, by all accounts.

According to Rayner, this is a surf and turf joint that bristles with machismo. “It’s worth going to see what the unmitigated male ego looks like, when expressed as a restaurant,” he wrote. In many respects, it was the perfect venue for Pochettino. The big man was happy to write the big cheque and it was the sort of occasion that shone a light on his passions and what he is driving at Spurs.

Pochettino loves to be at the heart of a family atmosphere while he is also obsessed by positive energy and emotion; creating bonds between people. Since his arrival at Tottenham in the summer of 2014, he has sought to build a collective spirit, on and off the field, and nights like Wednesday are a part of the process.

They have been a hallmark of Pochettino’s managerial career. At his previous club, Southampton, for example, he turned up unexpectedly at an end-of-season dinner in honour of a couple of junior members of the recruitment department who were leaving. He energised the occasion. And he picked up the bill.

Pochettino has tried to get everyone together at Tottenham whenever possible and there was one time when he felt obliged to do so. In the aftermath of the death of the club’s under-23s’ coach, Ugo Ehiogu, Pochettino was a part of a group meal that celebrated his life. There were about 40 in attendance, including the players from Ehiogu’s squad.

Pochettino considered the red meat and red wine fest at Beast – ahead of Saturday’s Premier League derby at West Ham United – to be an opportunity for the summer signings to integrate, “to engage with everyone”. Serge Aurier and Fernando Llorente had arrived as late as transfer deadline day, with Juan Foyth having come the day before and, with the remorseless churn of the fixtures, there has not been much time for bonding away from the field.

“It is so important,” Pochettino said. “To know each other better; to speak in a different way. That creates links between them, emotion. And when you must fight in a competition, there’s more of a willingness to help your team-mates and care more for them and care more for the gaffer that pays the restaurant bill! It’s not only about tactics but outside the pitch, too. Putting all the staff, the players and the chairman in a restaurant – that is tactics, too.

Pochettino had been asked, jokingly, which branch of McDonald’s he had taken everybody to? “No, no, no. When I pay, I pay good,” he replied. “Good restaurant, good food, good wine. Argentine wine, which is the best.”

It is clear that to create a “good dynamic”, to borrow Pochettino’s phrase, there is one essential ingredient – time. He feels that he has been able to change the mentality at Tottenham and there is no question he has moved them up a level. But he refuses to stand still and he believes that his new signings – the others are Davinson Sánchez and Paulo Gazzainga – can enrich the blend.

“With Llorente, it’s about having a different alternative up front to Harry Kane,” Pochettino said. “He won the World Cup but he’s so humble and he provides very, very good energy. It’s only been a few weeks that the signings have been involved in the dynamic of the team, the club, and they need time. Only time. But I think we’re strong. I’m so happy with my squad.” Guardian Service