What sets Kieran Tierney apart from other talented young Scots?

Celtic defender will again look to impress again against Anderlecht 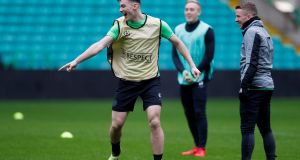 Kieran Tierney has made a habit of bucking trends. Where emerging youngsters in Scotland would be readily coaxed by the bright lights and brighter pay cheques of the Premier League, Tierney has no such short-term aspiration at all.

Attitude and application have denied Scotland a host of footballers who shone in their youth but Tierney displays a level of determination which sets him apart from his peers. When Anderlecht visit Celtic needing to win by three goals or more to knock the home side out of the Europa League qualifying spot on Tuesday, the left-back will be afforded his latest chance to continue a process of learning which has seen scouts line up to file recommendations.

Brendan Rodgers provokes smiles with occasional over-praise of individuals but his assessment of Tierney comes without contradiction. The Celtic manager knows a thing or two about the fulfilling of talent having overseen as much during previous coaching spells.

“I’ve worked with who I consider to be the two best full-backs in Britain: Danny Rose at Watford and Ryan Bertrand at Chelsea, ” said Rodgers. “Kieran is right up there with those boys. He’s still very young, still has bits of improvement to make but his quality, his will and determination and his focus for a young player is outstanding. This is a young player who can play in the top four of the Premier League if that’s where he wanted to go.

“He’s got an incredible determination, an old-school determination. He lives his life right, he doesn’t drink or do stupid things. He’s in every day training like a dog.”

Tierney’s marquee moment, an indication of his approach, did not even arrive during a phase of play. In last May’s Scottish Cup final he was cracked in the face by the elbow of Aberdeen’s Jayden Stockley, leading to a hospital trip and emergency dental surgery for the Celtic player.

“I’d have spat my teeth out to play on,” Tierney said. He reappeared at Hampden Park, where he had to negotiate security before bounding up the stairs to join the Scottish Cup victory parade.

That Tierney adores Celtic as much as football itself is clearly useful to the club, who recently afforded him a contract to 2023. This love affair is mutual; Celtic’s fans can identify with Tierney, who would not swap his employer for any in world football.

Naturally that will change; Tierney’s recent joining of a high-profile management company infers there is knowledge of a pathway to England at some stage. For now, he has captained Celtic without starting 100 league matches. Celtic’s commanding of high fees for Aiden McGeady, Victor Wanyama and Fraser Forster means Tierney will not be coaxed away cheaply. That he represents a nation worryingly unaccustomed to producing blue-chip talent should make no difference on that front.

Not only does Tierney barely miss a training session, coaches revel in the fact he approaches each one in the same manner as games. The same applies to opposition; Tierney will treat Kylian Mbappe like a forward at Hamilton Academical which, rather than displaying naivety, illustrates a wonderful unwillingness to cower in the face of reputation. Tierney, like many of his team-mates, endured harrowing evenings in Paris and Munich in this Champions League campaign but he also delivered an outstanding home performance against Bayern which, in spells, visibly impressed Celtic’s German opposition.

That Celtic have a highly valuable commodity in Tierney is undeniable. At 20, and without being disparaging towards Andy Robertson, Tierney is superior to his compatriot and fellow left-back who commanded a recent transfer to Liverpool. Therein lies an interesting parallel; whereas Robertson found himself rejected by Celtic and motivated by a hunger to rebuild his career, Tierney benefited from a positional change while in the Scottish champions’ development system.

As a left midfield player, Tierney was unlikely to be a Celtic star. He was not, after all, cut from the same winger’s mould as defines so many of the club’s icons. It is testament to Ronny Deila, a Celtic manager under regular pressure, that he not only afforded Tierney a first-team debut at left-back but oversaw the player making that position his own. “Kieran can go all the way,” predicted Deila.

It has been Rodgers’s task to increase Tierney’s game intelligence and compensate for the player’s one main shortcoming, a lack of height. Tierney is brilliantly powerful to the point where shortcomings are masked, he retains superb tackling skills when one-on-one and has shown a ferocious shot on occasion. Tierney’s versatility has led to him being deployed at centre-half and even right-back, for Scotland, but his future will inevitably be on the left side of defence. It will also, barring something unforeseen and extraordinary, be bright.