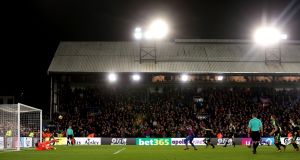 Benteke wrestled the ball off regular penalty taker Luka Milivojevic – who had already converted a first-half spot-kick – only to see his added-time effort saved by Asmir Begovic.

Palace slipped to the foot of the Premier League table despite their 2-2 draw with Bournemouth and manager Hodgson refused to hide his fury with Benteke.

The Belgium striker missed his fourth Palace penalty of the calendar year, and stretched his goalless run to 12 matches, with Hodgson insisting he deserves to suffer the wrath of the Selhurst Park fans.

“Why did Christian Benteke take the penalty? Well, I don’t know the answer to that,” said Hodgson.

“We expected Luka to take it, he’s our designated penalty taker.

“For some reason Christian persuaded him to let him take it, and then he missed it.

“I think Christian is stunned, shocked and very disappointed. But I actually thought he played well, that’s the best I’ve seen him play in a Palace shirt in my time here.

“It’s a great disappointment. Rather than crown that performance he’s put himself in a bit of a black hole with Palace supporters because he’s missed.

“He was booed off at the end of the game, but I think he was booed off because having seen us work as hard as we did in the second half, when the referee blew for that penalty the fans were thinking we’d won it.

“Then the guy who misses it, I’m afraid you have to accept he’ll be booed off the field, and that’s not just here, that’s anywhere around the world.”

Palace boss Hodgson was confronted by a supporter as he left the field at full-time, and revealed the Eagles fan merely asked him why Benteke had taken the late spot-kick.

“There was no altercation, the fan asked a question, which I answered,” said Hodgson.

“He asked me a question, and a valid one. He said ‘Why did you tell Benteke to take the penalty?’, and I said ‘I didn’t’.”

Asked if Benteke would be told again not to step up for future penalty duties, Hodgson added: “I think he’s been told that already.

“The next time there’s a penalty, after missing one that’s deprived us of two very valuable points, I can’t imagine he’ll be racing for the ball again.”

Jermain Defoe passed 200 career league goals as his brace earned Bournemouth a point, with his second strike a lob of stunning quality.

Cherries manager Eddie Howe hailed the 35-year-old for ending a run of seven games without a goal.

“I’m really pleased with both goals, they are totally different finishes as well.

“For the second, from that angle he’s got no right to score, and that’s his unique talent.”