Hearts make a bad week worse for Celtic at Tynecastle 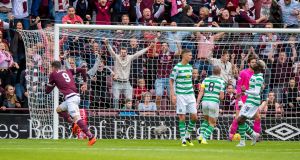 Kyle Lafferty’s 56th-minute strike was enough to separate Hearts and Celtic in a bruising Ladbrokes Premiership tussle at Tynecastle.

The encounter demonstrated the enthusiasm and energy of Scottish football more than the talent and technique, although the returning Northern Irishman’s volley from the edge of the box in the second half was fit to win any match.

Celtic boss Brendan Rodgers rang the changes from the midweek game against AEK Athens and found he did not have enough strength in depth to overcome a battling Gorgie side as the visitors slipped to a 1-0 defeat.

It was a tough work-out for the champions ahead of the second leg of their Champions League qualifier in Greece on Tuesday night, where, following a 1-1 draw at Parkhead in midweek, the Hoops hope to progress through to the play-off stage.

That challenge will certainly be more technical than the one they encountered in Gorgie, not that Hearts boss Craig Levein and his side will care too much after taking six points from their first two league matches.

In the middle of two crucial European qualifiers, Rodgers reshuffled his squad with Jonny Hayes, Jozo Simunovic, Eboue Kouassi, Scott Sinclair and Leigh Griffiths all coming in while Lafferty returned to the Jambos line-up along with Michael Smith and Jake Mulraney.

The fixture, in traditional style, began at breakneck speed and the sheer physicality of Hearts brought some success.

Lafferty’s header from an Uche Ikpeazu cross was comfortably saved by former Hearts goalkeeper Craig Gordon in the ninth minute before the hosts claimed a penalty when Simunovic challenged Steven Naismith as he tried to get on the end of a Mulraney cross.

The visitors had shown little in an attacking sense but in the 21st minute Sinclair worked a clever one-two with Callum McGregor then fired wide from a tight angle, reminding the Jambos of Celtic’s latent threat, as did skipper Scott Brown when he flicked a Griffiths corner over the bar.

Celtic came close near the end of the half when Griffiths took a Sinclair pass and slalomed inside the Jambos box before firing past goalkeeper Zdenek Zlamal only to see Smith clear off the line.

In trying to defend the Hoops attack, Hearts skipper Christophe Berra injured himself and was taken from the field on a stretcher, replaced by Aaron Hughes, before Naismith appeared to kick out at Hayes as the Hoops player lay on the ground following a tussle.

The interval allowed everyone a much-needed breather which appeared to benefit Celtic players the most, defender Mikael Lustig drawing a save from Zlamal with a lofted shot two minutes after the restart.

The Hearts keeper then had to make a double save, first from Griffiths and then McGregor, after Lafferty had handed possession to Sinclair with a careless pass.

However, a minute later the big striker, a target for former club Rangers, more than made up for that error when he sent a delicious left-footed volley from an Ikpeazu cross low past Gordon from the edge of the box.

In response, Griffiths soon made way for Odsonne Edouard with James Forrest on for Hayes before Tom Rogic replaced Kouassi.

The Australia midfielder fired a drive from the edge of the box inches wide as the Hoops rallied but Hearts held firm for a morale-boosting win.